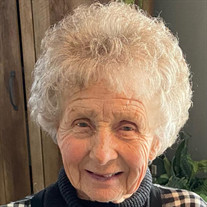 Eleanor Ruth (Collins) Ammon died Sunday, December 26, 2021 at the Rock County Hospital in Bassett, Nebraska with her family at her side. Eleanor was born in Merriman, Nebraska to Harley and Anna (Arent) Collins on June 15, 1931. At a young age, she moved with her family to a home seven miles south of Ainsworth, Nebraska where she attended a one-room schoolhouse and later graduated from Ainsworth High School in 1949. Eleanor met the love of her life, Raymond Ammon while babysitting for his sister and they were married on October 16, 1949. To this union three children were born, Bernice, Karen, and Jerry. Eleanor spent her life taking care of her family, cooking meals and feeding anyone who stopped by, sewing clothes, quilting, caring for all of her flowers, as well as gardening to keep her family fed through the winter. She hosted many family gatherings and her nieces and nephews loved coming down to spend time at the ranch. Eleanor was a kid at heart and her grandchildren’s number one play date. They loved spending weekends riding snowmobiles or tubing down snow-covered blowouts. Of course, they all got to cut thistles, gather eggs, help milk the cows or feed the calves, and cut wood. But it was for Grandma, so they all wanted to help. Eleanor was a member of the United Methodist Church in Bassett and the Helping Hand Club. She lovingly cared for Raymond and was lost when he passed away in May of 2009. Through it all, Eleanor’s strong faith in God carried her through the hard times as well as the good. Eleanor continued to stay at her home on the ranch and her wish to always stay home came true. Eleanor was an inspiration to her family and friends, who all will miss her in their lives. . She was preceded in death by her husband, Raymond; parents, Harley and Anna Collins; father-in-law and mother-in-law, Harry and Addie Ammon; granddaughters, Jeanie Allen and Angie Schoenenberger; siblings, Ralph (Norma) Collins, Charles (Cleo) Collins, Lois (Don) Schultz, Sid Collins, and Frank Collins; brother-in-law, Harold (Delores) Ammon; sisters-in-law, Marie (Lawrence) Lange, and Lucille (Dick) Hopkins. Survivors include children, Bernice (Butch) Allen of Bassett, Karen Allen of Long Pine, Jerry (Rhonda) Ammon of Bassett; five grandchildren, Kelly (Brad) Frederick, Kevin (Jessica) Allen, Ryan (Amy) Allen, Camie (Kyle) Magary, and Brady Ammon; eight great-grandchildren; numerous nieces and nephews, and sister-in-law, Myrtle Collins of Ainsworth. Funeral Services were held on Thursday, December 30, 2021 at the United Methodist Church in Bassett, Nebraska with Pastor Jeanie Leeper officiating at the service. Music was provided by Faye Smith. The Vocal Selection of, “Amazing Grace” was sung by Rhonda Wulf , the Congregational Hymn of, “How Great Thou Art” and a CD Selection of “Knowing What I Know About Heaven” by Sarah Darling was played. Interment followed at the Sybrant Cemetery in Bassett, Nebraska. Casket Bearers were: Ryan Allen, Kevin Allen, Brady Ammon, Kyle Magary, Brad Frederick, Darren Allen, Alex Schoenenberger and Braden Allen. Honorary Casket Bearers were: Kelly Frederick, Camie Magary, Jessica Allen, Amy Allen, Laynie Allen, Carson Magary, Cooper Magary, Cameron Magary and William Frederick. Memorials were suggested to the Rock County Hospital, the United Methodist Church or to the Rock County Ambulance Association in Eleanor’s name.

Eleanor Ruth (Collins) Ammon died Sunday, December 26, 2021 at the Rock County Hospital in Bassett, Nebraska with her family at her side. Eleanor was born in Merriman, Nebraska to Harley and Anna (Arent) Collins on June 15, 1931. At a young... View Obituary & Service Information

The family of Eleanor Ruth (Collins) Ammon created this Life Tributes page to make it easy to share your memories.