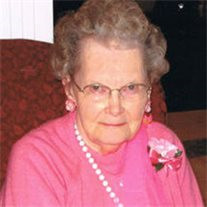 Elaine (Waits) Larrington passed away May 20, 2013 at the Parkside Manor in Stuart Nebraska at the age of 86, following a lengthy fight with Parkinson's disease.  She was the second child born to Keith and Eleanor (Gillam) Lenington on May 18, 1927 in Chadron, Nebraska. Elaine was baptized on April 8, 1928 in the Chadron United Methodist Church and joined the church on April 9, 1939. She grew up in Chadron where she attended grade school and graduated from Chadron Prep School at the age of 16 in May, 1944. Elaine graduated from Chadron State Teachers College with a Bachelor of Arts Degree in Music and Home Economics in May, 1950.  Elaine taught Home Economics for three years before taking the home extension agent position in Ainsworth. This is where she met her love Eugene Edward Waits. They were married at the United Methodist Church in Chadron, Nebraska on October 9, 1955. To this union two children were born, Bradford Eugene and Bart Alan. They lost a baby boy at birth in December of 1963. Elaine was a stay at home mom until Eugene's death from Leukemia on October 23, 1967.  Elaine worked as a secretary for the principal at Ainsworth High School from 1968 to 1975 and was employed by Farmers Rancher Coop from 1975 until she retired in 1989.  She married Rolan C. Jackson on June 7, 1971 at Burke, SD. Rolan passed away on vacation at Salida, Colorado on June 19, 1987.  Elaine and Leon Larrington were married in O'Neill, Nebraska on September 1, 1989. They moved to Neligh, Nebraska in 1989 where they lived until moving to Cottonwood Villa in Ainsworth in 2001. Leon passed away in April of 2003. Elaine continued living at Cottonwood Villa until 2010 when she entered Parkside Manor at Stuart, Nebraska living there until the time of her death.  Elaine was very active in the Ainsworth United Methodist Church where she was the choir director for many years. She was also very passionate about her PEO chapter for the past 59 years, holding many offices as well as being president. Elaine enjoyed playing bridge and other card games where she was very competitive. Her favorite hobbies were puzzles, sewing, cross stitch, knitting, and crocheting.  Dessert was her favorite. She would leave food on her plate to save room for dessert, especially chocolate, but her most treasured love was music. Elaine played the piano and organ and for many years and gave piano lessons to many children. In the past few years she enjoyed playing the piano for the residents at Cottonwood Villa and at Parkside Manor. Proceeding Elaine in death was an infant son; her husband's: Eugene Waits, Rolan Jackson, and Leon Larrington, parents, Keith and Eleanor (Gillam) Lenington, brother-in-law, Dave Kauffman, father and mother-in-law, Rudolph and Nellie (Kackmeister) Waits.  Survivors include her sons, Bradford (Cammie) Waits, Bart (Penny) Waits, all of Ainsworth; grandchildren, Amber Waits, Ord, Nebraska and Derek (Emily) Waits, Wood Lake, Nebraska; sister, Lois Kauffman, Scottsbluff, Nebraska; brothers and sisters-in-law, Les (Norma) Waits; Melba (Francis) Bejot, all of Ainsworth; nieces, nephews, cousins, stepsons, stepdaughters and friends. Funeral services were held at 2 p.m., on May 25, 2013 at the United Methodist Church in Ainsworth with Pastor Eldon Davis officiating assisted by Sam Fisher. Special music was provided by Sherry Campbell, Methodist Church Choir directed by Mel Campbell, and Kristy Beegle. Sound technician was Doug Weiss. Burial was held at the Ainsworth Cemetery under the direction of Hoch Funeral Home. Pallbearers were Steve Bejot, Tom Bejot and Terry Bejot, Roger Sisson, Bryan Kienke Mark Lanz Henry Beel, and Corvin Hinrichs. Honorary Pallbearer's are all of Elaine's Other Family and Friends. Memorials were suggested to the Ainsworth United Methodist Church, Parkside Manor and Asera Care Hospice.

Elaine (Waits) Larrington passed away May 20, 2013 at the Parkside Manor in Stuart Nebraska at the age of 86, following a lengthy fight with Parkinson's disease. &#8195;She was the second child born to Keith and Eleanor (Gillam) Lenington on... View Obituary & Service Information

The family of Elaine Larrington created this Life Tributes page to make it easy to share your memories.