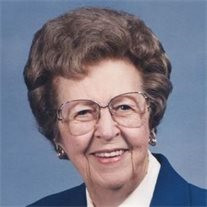 Edna Hitchcock was born to Frank and Wilhelmina (Schenk) Pelster on August 25th, 1913, at the family farm northeast of Johnstown, Nebraska. She was the youngest of nine children. Edna attended elementary school at District #8 in Brown County and graduated from Johnstown High School in 1930. Following graduation, Edna taught school in the Chain Lakes area in Brown County. She met Howard Hitchcock at a dance in Johnstown and they were married at O'Neill, Nebraska, on November 10th, 1939. They made their family home on the Hitchcock Ranch south of Ainsworth, Nebraska. Two children were born to Edna and Howard, a son Gordon and a daughter Phyllis. In the spring of 1959, the family moved to Ainsworth. After Howard passed away in 1992, Edna continued to live in their house in Ainsworth until 2007 when she moved to Cottonwood Villa. In 2011 she moved to the Ainsworth Care Center. When Edna moved to Ainsworth she learned to play bridge and spent many hours with friends playing bridge. As she got older and lost some of her sight, she still loved to play pitch with family and close friends, Doris and Wilford Leach, every Sunday afternoon. In addition to being an avid card player, she was also a great seamstress and also liked to take her grandchildren fishing. Edna passed away at the Brown County Hospital on November 4th , 2012, at the age of 99 years. She was a wonderful mother, grandmother, great-grandmother, and mother-in-law. Her sweet spirit and sense of humor will be greatly missed. In addition to her parents, Edna was preceded in death by her husband, Howard, three brothers and five sisters. She is survived by her son, Gordon Hitchcock, and wife Shirley of Ainsworth; daughter, Phyllis Leach, and husband Gary of Ainsworth; five grandchildren and sixteen great-grand children. Graveside services were held on November 8, 2012 at the Ainsworth Cemetery in Ainsworth, Nebraska with Pastor Eldon Davis officiating over the service. Honorary bearers were, Jay Hitchcock, Wes Hitchcock, Kara Hitchcock, Dacia Davis, Melissa Doke, Jordan Hitchcock, Grant Hitchcock, Joel Hitchcock, Abbi Hitchcock, Kylee Brathwait, Gunnar Hitchcock, Wyatt Hitchcock, Alli Hitchcock, Savannah Mathias, Chandra Davis, Micah Davis, Isaiah Davis, Josiah Davis, Janaya Davis, Alexia Davis, and Addilyn Doke. The CD selection of "Amazing Grace" (My Chains Are Gone) was recorded by Melissa Doke. The 23rd Psalm was read by Chandra & Micah Davis. Memorials were suggested to the family in her name. Hoch Funeral Home was in charge of the arrangements.

Edna Hitchcock was born to Frank and Wilhelmina (Schenk) Pelster on August 25th, 1913, at the family farm northeast of Johnstown, Nebraska. She was the youngest of nine children. Edna attended elementary school at District #8 in Brown County... View Obituary & Service Information

The family of Edna (Pelster) Hitchcock created this Life Tributes page to make it easy to share your memories.

Edna Hitchcock was born to Frank and Wilhelmina (Schenk) Pelster...