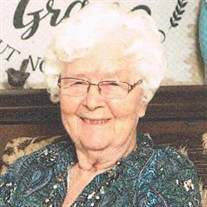 Edith Mae Keller was born September 2, 1924, on the old Magee place south of Johnstown, NE to Jens Gade Andersen and Kirsten (Nielsen) Andersen. She was the third child and the only girl in a family of three brothers: Einar, Elmer and Donovan. Edith started school at the age of four at the 84 South School, west of Ainsworth, NE where the Quinn gravel pits are now. Horses always played a big part in Edith’s life. Jens loved horses; he bought, sold, trained, and traded horses, mules, and Shetland ponies. Edith was right there to help. One of her first jobs was driving the milk cows to and from pasture on a Shetland pony. When Edith started high school, they moved to the ranch just west of the Bassett Sale Barn. Most of the time, she walked to and from school with her younger brother Donovan. She was always very active, whether on the ranch doing chores, waiting tables in Bassett, or participating in activities in school. She was in pep club and a member of the National Honor Society. She also had a special skill with mental mathematics. She took Normal Training, which was to prepare for teaching school after graduating from high school. Her first teaching job at the age of 17 in 1941 was at a school 25 miles south of Bassett, NE. She boarded with the Lloyd Brown family. She and their daughter rode horses four miles to school. When the weather was nice, Jens would drive out to pick her up on Friday. Monday mornings, she rode back out with the mail man. She made $45.00 a month but paid $12.00 for room and board. Her second year of teaching was just ten miles south of Bassett. In the summer of 1943, she went to Los Angeles, CA by train, stayed with her brother, Einar, and worked at Lockheed Vega Airplane Factory, riveting P-38 airplanes. When she came home for Christmas, she got her third teaching job, this time finishing out a term for a teacher that had become ill. This school was only three miles south of Bassett. After that she went to Hastings, NE working in wartime airplane construction again. At Christmas time in 1944, Helen Christensen, a good friend and future sister-in-law and Edith caught the old Chicago Northwestern train to Chicago. Edith once again got a job in the aircraft construction with Honeywell, making automatic pilot controls for war planes. As the war came to an end, so did her job with Honeywell. She stayed in Chicago working in the offices of Sears & Roebuck. She came home October 13, 1945 and Clesson Keller was home from the war in Europe. They were married December 13, 1945. She packed her suitcase and moved to the ranch four miles south of Newport, NE. To this union were five children: James Dee, William Frank, Sally Marie, Richard Lee and Ruth Helen. Clesson died of cancer in April 1962, leaving Edith with four kids to raise and a ranch to run. She continued to live on and run the ranch until 1975 when Jim married and moved to the ranch. While on the ranch, she was always active in the day-to-day management and work. She was on the school board of District #21, Newport United Methodist Church Sunday School Superintendent, and very active in the Diamond Valley 4-H Club. After moving to Bassett, she continued to help on the ranch, working calves, driving cattle to and from pasture south of Long Pine, riding Jake her palomino horse, going to bull sales, and attending the sale of her calves at Bassett Livestock Auction. Edith worked at Bassett Livestock delivering tickets for many years, a job she really enjoyed. Edith was also on the Rock County High School Board for two terms, she was a member of the Rock County Fair Board for more than 20 years, she also was always active in the Bassett United Methodist Church, the American Red Cross Blood Drives and the American Legion Auxiliary. Edith passed away February 24, 2022, at the age of 97 at Rock County Hospital Long Term Care in Bassett. She was preceded in death by her husband Clesson, son William “Billy,” daughter Sally, grandson Troy Schroder and daughter-in-law Gina Keller. Edith is survived by her son James (Kristie) of Newport, son Richard of Johnstown, and daughter Ruth (Perry) Keys of Lincoln, NE; 13 grandchildren and 17 great-grandchildren; along with numerous nieces, nephews and other family members. A Memorial Service will be held on Friday, June 17, 2022 at 10:30 AM in the Bassett United Methodist Church with Pastor Jeanie Leeper as the officiant. Music will be provided by Kristie Keller. Inurnment will follow in the Newport Cemetery. Memorials have been suggested to the Newport Fire Hall in Edith’s name. Hoch Funeral Home of Bassett is in charge of arrangements

Edith Mae Keller was born September 2, 1924, on the old Magee place south of Johnstown, NE to Jens Gade Andersen and Kirsten (Nielsen) Andersen. She was the third child and the only girl in a family of three brothers: Einar, Elmer and Donovan. Edith... View Obituary & Service Information

The family of Edith M. (Andersen) Keller created this Life Tributes page to make it easy to share your memories.