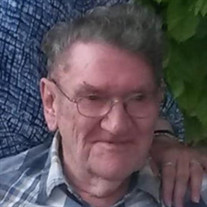 Earl Herbert Fernau was born April 28, 1928 at his Aunt Leti’s home in Ainsworth. He was the 9th of 14 children, eleven boys and three girls born to David and Ella (Wolcott) Fernau. Earl H. Fernau, 92, passed away Wednesday June 17th in Ainsworth NE. While still a young child, he had polio but with his many siblings helping him to get past the effects, he continued on to have a normal life. He graduated from Ainsworth High School in 1946. He started working at the Rolling Stone Ranch in his late teens, where he quickly became the foreman. On October 30, 1960, he and Laura Juaneta Hambleton were married and he adopted her son. They were married at the Methodist church in Ainsworth and made their home on the Rolling Stone Ranch southwest of Wood Lake. In 1963 they had a daughter born in Valentine. In 1965 Juaneta passed away due to cancer. He then moved to Ainsworth and worked for local businesses including Aurora Coop, the local John Deere Dealership and the hardware store. He also did some trucking over the years. In 1970 he adopted another son during a second marriage that ended in divorce. He farmed on acreage southwest of Ainsworth for many years (originally homesteaded by his father). Even though he had many siblings, they were close and he looked forward to and enjoyed the family reunions to catch up with everyone. Family was important to him and though distance and health kept him from traveling to see his grandchildren in later years, he enjoyed hearing about everything they were doing. Earl is preceded in death by his parents, David and Ella, wife Juaneta, three sisters, Lottie, Vera Esterly and Ruby Barritt; eight brothers, Lester, Glen, Charles, Wilbur, Calvin, Dean, Dale, and Rodney; numerous nieces and nephews and extended family. He is survived by his children, Don (Saberina) of Clovis, NM, Cindy (Arthur) Starnes of Aurora, NE, and Robert (Laurie Jirovsky) Fernau and of Goehner, NE; Two brothers, Lavern (Ida Belle) Fernau of Idaho and Sidney (Joyce) Fernau of Idaho; eight grandchildren and five great-grandchildren. Graveside Services were held on Saturday, June 20, 2020 at the Ainsworth Cemetery in Ainsworth with Pastor David Randall officiating at the service. Casket Bearers were family members of Earl. Memorials were suggested in Earl’s name to the family for future designation. Hoch Funeral Home of Ainsworth was in charge of arrangements and condolences may be left for the family by visiting www.hochfuneralhome.com.

The family of Earl H. Fernau created this Life Tributes page to make it easy to share your memories.