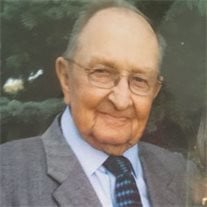 Sid Salzman was one of a kind. The one and only child and pride and joy of Albert and Leona Salzman. He was born in Ainsworth, Nebraska on February 23, 1927 and passed away in Ainsworth on February 21, 2015, just 2 days before his 88th birthday. After graduating from Ainsworth High School, Sid received a degree in agronomy from the University of Nebraska in Lincoln. He returned home to follow in his father's footsteps to become a second generation rancher. In 1948, he went on a blind date with a nice Catholic girl from Valentine, Nebraska - Ruth Bachelor. He called it "his lucky day". He joined the Catholic faith and married Ruth in Valentine on August 27, 1949. They started their life together in a small bunkhouse on the family ranch south of Ainsworth. Over the course of 65 years, they built a legacy of faith, family, and friends. They had five children - Mary Beth, John, Ann, Steve, and Peggy. They were blessed with fourteen grandchildren, ranging in age from 37 to 4, plus eleven great grandchildren. Sid was dedicated, generous, enthusiastic, fun-loving, and opinionated. He was a promoter of progress and innovative thinking and a man who got things done. As a lifetime resident of Ainsworth, he served on numerous boards and committees, including mayor, always with the intention of bettering and giving back to his beloved Brown County. Sid was proud to be a Sandhills cattleman. He loved the native grasses and rolling hills. One of his greatest accomplishments was building the Salzman Family Ranch and working alongside his two sons, the third generation of Salzman ranchers. He never stopped ranching. Even after he "retired", he checked in with "the boys" to get his ranch work for the day. Sid loved golf, Nebraska football games and being with his friends and family. He was known for speaking his mind and being a colorful character. He won awards, received recognition and enjoyed success. He was loved and respected by his family, friends, peers, and community. He lived a full and complete life. There will never be another Sid. Visitations were held on Tuesday, February 24th , 2015 at the St. Pius X Catholic Church with a Rosary Service held at 7 PM. Funeral services were held on Wednesday, February 25th. Father Phil Flott served as Celebrant and Father Jim Hunt and Father Lou Nollette assisted in the services. Music was provided by Drew Klatt and Nichole Flynn with song selections of "Be Not Afraid","On Eagle's Wings","Table of Plenty","You Are Mine" being provided by granddaughters Hannah & Maria Rutledge. Pallbearers were, Dave Aschwege, John Rutledge, Dave Rutledge, Jeff Rutledge, Mark Kozisek,and Randy Hart. Honorary bearers were Dan Kozisek, George Kamas, Memorials were suggested to the Brown County Foundation, the Sandhill's Cancer Fund Inc. in Sid's name. Burial was held at the Ainsworth Cemetery. Hoch Funeral Home was in charge of the arrangements.

Sid Salzman was one of a kind. The one and only child and pride and joy of Albert and Leona Salzman. He was born in Ainsworth, Nebraska on February 23, 1927 and passed away in Ainsworth on February 21, 2015, just 2 days before his 88th birthday.... View Obituary & Service Information

The family of Mr. Sidney E. "Sid" Salzman created this Life Tributes page to make it easy to share your memories.

Sid Salzman was one of a kind. The one and only child and pride...