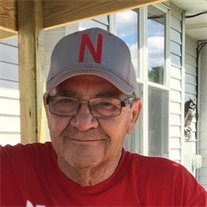 Paul E. Josoff passed away peacefully at his home on August 22, 2017. Paul was born March 6, 1943 in Omaha Nebraska. He is the eldest of five children born to Ruby (Grinnell) and Eli Josoff. He graduated from Omaha South High School in 1960 and was proud to be an SOB "South Omaha boy." He was a Fire Sprinkler Fitter for over 30 years and belonged to Local 669, UA. Paul retired to Long Pine Nebraska in 1999, where he enjoyed entertaining friends and family. He was an excellent cook and griller who took great pride and joy in his family especially his children and grandchildren. He loved to laugh, tease, give hugs, and was the Master of the Nebraska "one finger wave." Paul was the most avid of Husker fans. He celebrated the WINS and mourned the losses with equal vigor. Leaving to mourn Paul's passing are his three children, Deb (Dave) Radenslaben of Cedar Bluffs, Nebraska, Paul E. "PJ" Josoff III of Ashland, Nebraska, Shelah (Kevin) Fenner of Yutan, Nebraska; eight grandchildren, and seven great-grandchildren; two stepchildren, Julie (Ben) Bolte of Lincoln, Nebraska, and Philip Hiemer of Denver, Colorado; two step-grandchildren; brothers, Dan (Sharon) Josoff of Yutan, Mike (Madelyne) Josoff of Omaha, Nebraska, Tom (Nancy) Josoff of Plattsmouth, Nebraska; sister, MaryLou (John) Vampola of Plattsmouth; special friend, Jean James of Bassett, Nebraska, along with nieces, nephews, and other family members. He will be greatly missed by everyone. A Celebration of Life Service was held on August 28, 2017 at Hoch Funeral Home of Ainsworth, Nebraska with Pastor Brent Graves officiating the service. CD selections of "You Should Be Here" by Cole Swindell and the "Nebraska Fight Song" by the UN: Marching Band were provided. Pallbearers were, Jim Carley, Willy Crist, Tim Iverson, Don Schipporeit, Verny Kreiger, Steve Warnke, Bob Alberts and Bob Graham. The Eulogy was shared by Paul's granddaughter, Courtney. Honorary bearers were all of Paul's other friends. Burial followed at the Grandview Cemetery in Long Pine. In lieu of flowers, memorials were suggested to the family for a future designation.

Paul E. Josoff passed away peacefully at his home on August 22, 2017. Paul was born March 6, 1943 in Omaha Nebraska. He is the eldest of five children born to Ruby (Grinnell) and Eli Josoff. He graduated from Omaha South High School in 1960... View Obituary & Service Information

The family of Mr. Paul E. Josoff created this Life Tributes page to make it easy to share your memories.

Paul E. Josoff passed away peacefully at his home on August 22,...