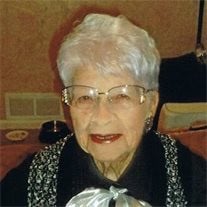 Marcella was the youngest of four girls, born to Cora Eva (Stich) and Cincinnatus Johnson on December 1, 1921, at home on a farm four miles east of Ainsworth, Nebraska, and passed away on February 19, 2017 with her daughter and family by her side in Sterling Heights, Michigan at the age of 95 years, two months and 18 days. She attended and graduated from Ainsworth High School. Marcella was really involved in her community. She was a member of the America Legion, Auxiliary Member of the 8 and 40 Club, President of the Women's Club at Wood Lake, President of the Town and Country Club, State Chaplain of the America Legion Auxiliary, City Clerk of Wood Lake, Board Member and Secretary of the Wood Lake School Board, Chairman of the 1976 Bi-Centennial Celebration of Wood Lake, Notary Republic for 40 years, a school bus driver, and worked for 12 years for the Chicago North Western Railroad as a cook. She was a friend and neighbor for 62 years in Wood Lake. Marcella was preceded by her husband of 48 years, Edward Richard Welke of Wood Lake. Ed passed away in 1990. Also preceding her was her only son-in-law, Don M. Sierra; her three sisters, Annetta Johnson, May De Beel, and Nattellia Haskell. She is survived by her only child, daughter, Rita Sierra of Sterling Heights, Michigan; three granddaughters, Jody (Anthony) DiMaria of Armada, Michigan, Jill (Guy) Dinninger of Dewitt, Michigan, and Susan Sierra of Sterling Heights, Michigan; three great-grandchildren, Marcus Sierra, Collin and Kylee Dinninger; seven nieces, Laveta, Bonita, Judy, Jinx, Terri and Tony along with many great nieces and nephews and other family members. Funeral Services were held on Saturday, February 26, 2017 at Hoch Funeral Home in Ainsworth. Pastor Don Letellier officiated at the service. The CD selections of "God Walks These Hills With Me" by Eddy Arnold, and "The King Is Coming" by James Blackwood were played. A Tribute was given by granddaughter, Jody DiMaria. Casket bearers were: John Wheeler, John Hoefs, Ron Pinney, Bob Ries, Jim Welke, and Walter Ries Jr. Interment followed at the Ainsworth Cemetery. In lieu of flowers, memorials were suggested to the Sandhills Cancer Fund Inc.

Marcella was the youngest of four girls, born to Cora Eva (Stich) and Cincinnatus Johnson on December 1, 1921, at home on a farm four miles east of Ainsworth, Nebraska, and passed away on February 19, 2017 with her daughter and family by her... View Obituary & Service Information

The family of Mrs. Marcella E. (Johnson) Welke created this Life Tributes page to make it easy to share your memories.

Marcella was the youngest of four girls, born to Cora Eva (Stich)...