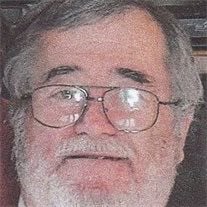 Dwayne Arnold Huelle was born November 22, 1946 at Ainsworth, Nebraska to Arnold and Mildred (Rudnick) Huelle. He passed away October 11, 2015 at his home in Franklin, Nebraska. Dwayne was baptized in the Lutheran Church in Ainsworth on January 28, 1946 and later was confirmed on May 21, 1961 there. Dwayne graduated from Ainsworth High School in 1965. He was united in marriage to Barbara Ann Patton on June 21, 1969 at Ainsworth. To this union was born three children, Jodi, Jennifer and Jamie. During his life, Dwayne lived in Lincoln, Nebraska, Grand Junction, Colorado, Thornton/Denver, Colorado, Eagle, Nebraska and lastly in Franklin. He was a member of the Emmanuel Lutheran Church in Eagle. Dwayne was a loving husband, father and grandfather. He loved to read. He also loved to bake, and play guitar and sing with his kids and grandkids. He was also an avid Nebraska football fan. Dwayne was preceded in death by his parents and grandparents. He leaves to mourn his passing his wife of 46 years, Barbara of Franklin; three daughters, Jodi Hanson and husband, Mike of Montrose, Colorado, Jennifer Huelle of Franklin, and Jamie Treblik and husband, Jesse of Firestone, Colorado; ten grandchildren, Angela Aberle, Faith Aberle, Bethany Aberle, Lilia Aberle, Moriah Aberle, Joseph Aberle, Stephen Aberle, Jake Hanson, Ashliee Trelik and Gunner Treblik. He is also survived by two siblings, Bill Huelle and wife, Mary Jo of Mitchell, Nebraska, D'Ann Washington and husband, Scott of Ashland, Nebraska; along with nieces, nephews and a host of other family members. Funeral Services were held on October 14, 2015 at the Zion Lutheran Church in Ainsworth, Nebraska with Pastor Georg Williams officiating over the service. Music was provided by Georgia Williams. Congregational selections were "Nearer My God To Thee" and "Old Rugged Cross". Pallbearers were Bill Huelle, Scott Washington, Joseph Aberle, Stephen Aberle, Jake Hanson, Jesse Treblik, and Gunner Treblik. Burial was held at the Ainsworth Cemetery in Ainsworth, Nebraska. In lieu of flowers, memorials were suggested to the American Diabetes Association.

Dwayne Arnold Huelle was born November 22, 1946 at Ainsworth, Nebraska to Arnold and Mildred (Rudnick) Huelle. He passed away October 11, 2015 at his home in Franklin, Nebraska. Dwayne was baptized in the Lutheran Church in Ainsworth on January... View Obituary & Service Information

The family of Mr. Dwayne Arnold Huelle created this Life Tributes page to make it easy to share your memories.