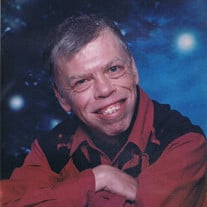 Douglas Earl Cole was born on January 31, 1961 in the old Ainsworth Hospital in Ainsworth, Nebraska to Earl and Dorothy (Brown) Cole. He passed away on June 21, 2018 at the Sandhills Care Center in Ainsworth. Doug was the oldest of seven siblings: Lynn, Lynda, Julie, Roxane, Bill and Chance. Throughout his young life he moved with his family several times around Nebraska, including Elsmere, Ogallala, Hershey, Sutherland and Rockford, Illinois. He eventually moved back to Ainsworth next door to his grandparents on the Cole Homestead. For a short time in his adult life, he lived in Axtell, Nebraska and O’Neill, Nebraska then back to Ainsworth where he became the unofficial town greeter — he never knew a stranger. Doug enjoyed fishing, camping, spending time with family, helping John at Big John’s Restaurant and especially socializing and just hanging out. He loved having good times with his friends and knowing that none of them could out dance him. He was a kind soul with a big heart, outrageous behavior, a contagious laughter and had a big smile that never went unnoticed. He will remain in our hearts forever. Doug is preceded in death by his father Earl Cole; stepfather Wendell Heckerson; and grandparents, Glen and Lena Cole and James and Camella Brown. Left to cherish his memories are his mother, Dorothy Cole of Ainsworth; brothers, Lynn of Ericson, Nebraska and fiance Elizabeth Ferguson of Milburn, Nebraska, Bill and wife Tanya of Ainsworth, Chance and wife Sarah of Ainsworth; sisters, Lynda Cole of Fremont, Nebraska, Julie Worden and husband Bill of Ainsworth and Roxane Troxel and husband Ben of Ainsworth, and many nieces, nephews and friends. Funeral services were held at the Ainsworth Church of the Nazarene, with Pastor Russell Thayer officiating the service. Music Selections of “Oceans” by Hillsong, “Life Is a Highway” by Tom Cochrane, “Spirit in The Sky” by Norman Geenbaum, and “Lead Me To The Sky” by Hillsong. Casket bearers were Jesse DeBolt, Dusty Worden, Thomas Troxel, James Worden, Keith Cole, and Colton Troxel. Honorary bearers were Shane Cole, Brandon Cole, and Wyatt Cole. Special memories were shared. Burial followed at the Ainsworth Cemetery under the direction of Hoch Funeral Home of Ainsworth. Memorials were suggested to the family for a future designation in his name.

Douglas Earl Cole was born on January 31, 1961 in the old Ainsworth Hospital in Ainsworth, Nebraska to Earl and Dorothy (Brown) Cole. He passed away on June 21, 2018 at the Sandhills Care Center in Ainsworth. Doug was the oldest of seven siblings:... View Obituary & Service Information

The family of Mr. Douglas E. Cole created this Life Tributes page to make it easy to share your memories.