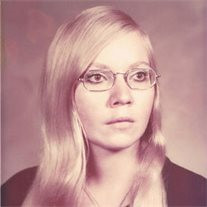 Dorothy Anne (Warnke) Mapes, age 58 went to be with her Father the Lord God, on Sunday June 23, 2013, at the Brown County Hospitalin Ainsworth, Nebraska, peacefully surrounded by her loving family. She was born to Eldon and Rosie(Seadore) Warnke on August 10, 1954 in Ainsworth. Married Dale Mapes Jr. on January 1, of 1976 at Ainsworth. She was a long time resident of Long Pine, Nebraska. We want to remember the life and vitality that was hers. Dorothy enjoyed life, accepted change, and looked forward to new experiences with enthusiasm and optimism. Her strong will to live, unwavering faith in God, and loving prayers of family, friends, and many supporters carried her through her 7 year courageous fight with cancer. When asked her secret on how she is able to keep joy she smiled and said, "It's simple, I never doubt the Lord". She expressed her joy in the Lord up to the final days and how she couldn't be sad, for He was her comfort and God had been good to her. Dorothy's life was a living example of her faith in God and the world is a better place because of her sweet gentle spirit. Preceding her in death were her father, Eldon Warnke, and son Clinton Eli Mapes. She is survived by her husband, Dale Mapes Jr. of Long Pine; daughters, Jo Lynn Drake and husband Dale of Sioux Falls, South Dakota and Amanda Hendrix and husband Troy of Kansas City, Missouri; mother, Rosie Warnke of Ainsworth; brother, Steve Warnke of Long Pine; sister, Betty Larson and husband Lloyd of Newport, Nebraska; nieces, nephews and 6 grandchildren. A graveside memorial service was held at the Grandview Cemetery in Long Pine, Nebraska. Pastor Gary Graesser officiated over the service. A special guitar selection of "Standing On The Promises Of God" was provided by Dorothy's Grandson, Tristun Hendrix. In lieu of flowers, memorials have been suggested to the family in her name.

Dorothy Anne (Warnke) Mapes, age 58 went to be with her Father the Lord God, on Sunday June 23, 2013, at the Brown County Hospitalin Ainsworth, Nebraska, peacefully surrounded by her loving family. She was born to Eldon and Rosie(Seadore) Warnke... View Obituary & Service Information

The family of Mrs. Dorothy Warnke Mapes created this Life Tributes page to make it easy to share your memories.

Dorothy Anne (Warnke) Mapes, age 58 went to be with her Father...