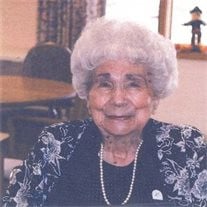 Doris May, daughter of Carl C. and Laurel Edith (Everingham) Moyer, was born in Ainsworth, Nebraska, June 25, 1921, and departed this life January 22, 2017 at Good Samaritan Pine View in Valentine, Nebraska. She attended Ainsworth public schools until her junior year in high school, and on her fifteenth birthday, she, with her parents and brother Bob, moved to Springview. Doris finished her high school education in Keya Paha County High School, where she participated in dramatics, declamatory contests and one-act plays, and served as accompanist for the musical groups. She graduated with the Class of 1938 and was salutatorian. At the age of 12 years, she professed her Christian faith and was baptized in the Congregational United Church of Christ in Ainsworth. She transferred her membership to the United Methodist Church in Springview at the age of sixteen years and remained a member of this church for 79 years. Doris served as an organist/pianist for 70 years, beginning in Ainsworth at the age of 11 as substitute organist in her church there. At the Springview United Methodist Church, she taught the high school youth class for 25 years. Not only was she a fixture in her church, she was an accompanist for the Springview Chapter of Order of Eastern Star for 50 years and member for over 70 years. On July 10, 1940, Doris was united in marriage to T. G. "Tom" Weddel. To this union one son, Lanny David, was born. These were happy, productive years, enjoying their son as he grew, supporting his school activities and enjoying him and his many friends. Along with her husband, Doris had a lively interest in the Boy Scouts program. She was a den mother of Pack #195 for 17 years. Doris' husband Tom passed away June 1, 1970. Doris was the accompanist for all things music for the school for 35 years. Many can remember the music programs that she orchestrated during her years at the school, each beautifully done with the students' impeccable performances. Doris taught music classes in five district schools for ten years. She also taught organ and piano lessons to many students. When Doris retired from teaching piano, she had 26 students, but her influence and lessons numbered into the hundreds over the years. It's not uncommon in this area to have three generations, all being students of Doris' in one capacity or another. At first Doris didn't keep track of the numerous events she played for, but after a couple of decades she started a list and kept a running tally of all the special events that she played for. This impressive list shows that she played for over 300 weddings and 540 funerals. The list of awards and accomplishments that Doris received over the years includes the Good Neighbor Citation from the Knights of Ak-Sar-Ben in 1963, recognition for her den mother endeavors from the National Council of the Boy Scouts of America-Overland Trails Council also in 1963, and a certificate of appreciation for outstanding service in 1967. Doris had a love of books, and remained an avid reader. This admiration of literature and the joy of sharing what she read led to an award she received for her contributions to literacy from the International Reading Association and the Niobrara Council of Nebraska in 1986. In 2001 she received the Random Act of Kindness Honor Award from the Nebraska Grand Chapter of Order of Eastern Star. Her kindness and generosity didn't stop there, in 1990 Doris was recognized for her conscientious and dedicated community service by Modern Woodmen of America, when an appreciation dinner was held in her honor, with 300 people in attendance to help her celebrate. A special mission recognition was awarded in honor of Doris for her commitment to the United Methodist Church. She received the Community Spirit award in 1995 for her years of service to the community that she loved so dearly. On April 21, 1991, she married Mel Olson, and he passed away six years later. She continued to live in her home in Springview until she moved to Cottonwood Villa Assisted Living in Ainsworth in April, 2006. She moved to Good Samaritan Pine View in Valentine in April of 2008, but always considered Springview her home. Doris was preceded in death by her parents, brother Bob Moyer, sister Glenda Skillman, son Lanny Weddel, granddaughter Nina Weddell Morgan, and step son Norman Weddell. Doris leaves to mourn her passing, daughter-in-law Kathy, grandchildren Lara and husband Dennis Norris, David Weddel and wife Amy, Tina Weddell, great-grandchildren Rebekah, Caleb and Rachel Norris; Makenzie and Colton Weddel ; Justin, Joel, and Jared Morgan and their families; cherished nieces, nephew, cousins, other relatives, and many treasured friends. Funeral Services were held on Friday, January 27, 2017 at the United Methodist Church in Springview with Pastor Rod Heilbrun officiating at the service. Music was provided by Rick Nelson with the congregation singing "How Great Thou Art" and "Amazing Grace." An instrument selection of "Old Rugged Cross" was also provided by Rick Nelson. Casket bearers were David Weddel, Dennis Norris, Phil Herring, John Lyman, Scotty Nelson and Tracy Nelson. Honorary Casket bearers were all of Doris' grandchildren and great-grandchildren, nephew Butch Skilllman and cousin, Fred Spearman. Interment was in the Mt. Hope Cemetery at Springview. Memorials were suggested to the Springview United Methodist Church or the Mt. Hope Cemetery in her name. Hoch Funeral Home of Ainsworth was in charge of the arrangements.

The family of Mrs. Doris M. (Moyer) Weddel Olson created this Life Tributes page to make it easy to share your memories.

Doris May, daughter of Carl C. and Laurel Edith (Everingham)...