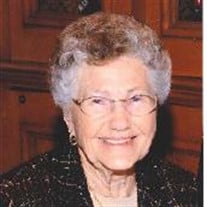 Dora Elizabeth Ricedorff was born to Burr Clifton and Eileen Eleanor (Provost) Ricedorff on December 24, 1922 in Wood Lake, Nebraska, the youngest of three children. She passed away on Friday, (January 8, 2021) in Omaha, Nebraska at the age of 98. Dora grew up in Chadron, Nebraska and graduated from Chadron High School in 1940. She attended Chadron State College and was united in marriage to Robert Donald Scott on June 6, 1943 in Gordon, Nebraska. They have two children, a daughter, Pam and a son, Rick. Dora and Bob lived in Crawford, Chadron and Omaha in the early days of their marriage. In 1946 Bob went into business with his father-in law, B.C. Ricedorff and they moved to Valentine to run the Red and White store there. Subsequently they moved to stores in Hay Springs and then to Ainsworth in 1952. Dora was active in various civic organizations in Ainsworth. She was a member of Bethany Chapter No. 113 of the Order of Eastern Star, serving as Worthy Matron; she served as Guardian of Jobs Daughters Bethel No. 37 and was a member of BPO D.O.E.S. She was a member of the Methodist Church, teaching Sunday School in her younger days. She was a member of PEO Chapter A in Phoenix, Arizona. Dora loved to play golf and bridge. She enjoyed all of the ladies leagues at the golf courses in Ainsworth, Bassett and Valentine. She competed in many ladies tournaments locally and throughout the state with her golfing friends. She was an excellent bridge player, having learned as a young woman and she continued to play until the age of 96. In 1973, Dora and Bob bought their first home in Sun City, Arizona. They joined the Sun City Country Club where she belonged to the ladies leagues and would also compete in guest day tournaments at other country clubs in the Sun City area. She continued to play bridge with several bridge groups in Sun City. Every summer Dora and Bob returned “home” to Nebraska and their cabin on the creek at Hidden Paradise. They returned to Ainsworth for good in the summer of 2016 and resided at Cottonwood Villas. Bob passed away on February 28, 2017. Dora was also preceded in death by her parents, Burr and Eileen Ricedorff; her brother, LaVerne Ricedorff; her sister, Annabelle Peterson; her daughter-in-law Emily Scott and an infant grandson, John. She is survived by her daughter, Pam of Las Vegas, Nevada; her son Rick (Joyce) of Omaha; her grandsons, Mark Olson (Marianne) and Scott Olson (Aura) of Las Vegas, Nevada; Dale Scott (Kim) of Omaha; Clint Scott (Lauren) of Austin, Texas; Justin Burr Scott (Aman) of Dallas, Texas and her granddaughter, Mary Kate Scott of Omaha. She is also survived by nine great grandchildren: Arianne Olson; Cole and Cameron Scott; Dylan, Caroline and Ava Scott; Courtney Franco (Andrew), Mia and Layla Scott; one great-great-grandchild Travis Franco; and numerous nieces and nephews. Graveside Memorial Services will be held on Saturday, July 3, 2021 at 10:30 AM in the Mt. Hope Cemetery at Wood Lake, NE with Pastor Martin Leeper officiating at the event. In conjunction with the service, Masonic Rites will be conducted for Bob Scott at this time as well. Memorials may be made to the Sandhills Care Center, the Sandhills Cancer Fund or to the donor’s choice. Hoch Funeral Home of Ainsworth is in charge of the arrangements and condolences may be left for the family at www.hochfuneralhome.com.

Dora Elizabeth Ricedorff was born to Burr Clifton and Eileen Eleanor (Provost) Ricedorff on December 24, 1922 in Wood Lake, Nebraska, the youngest of three children. She passed away on Friday, (January 8, 2021) in Omaha, Nebraska at the age... View Obituary & Service Information

The family of Dora E. (Ricedorff) Scott created this Life Tributes page to make it easy to share your memories.

Dora Elizabeth Ricedorff was born to Burr Clifton and Eileen...