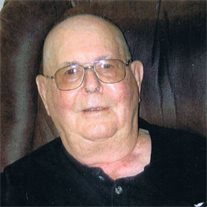 Donald Park Skillman "Earl" was born on April 1, 1920 to Harry F. Skillman and Grace E. (Malia) Skillman on the farm east and north of Ainsworth known as Buffalo Flats. He passed away Saturday, February 16, 2012 at the Brown County Hospital at the age of 92. Don attended country school through 8th grade at District #1. He began farming with his father at a young age. On October 15, 1941 he was inducted into the United States Army and served 4 years, 2 months and 6 days until being honorably discharged on December 20, 1945 at Fort Logan, Colorado. During his time in the service Don served overseas on Leyte Island and Okinawa with the 776th Amphibian Tank Battalion as a tank driver. He returned to the states and the home place where he was born and farmed and lived until late 2012 when he moved to Cottonwood Villa. Don married Glenda McConnell in 1946 and to this union two daughters were born: Janet and Katherine. He later married Phyllis Spies on February 1963 and to this union Phyllis brought three daughters: Teresa, Barbara and Peggy. Don and Phyllis later adopted their daughter, Brandi in 1984. Don and Phyllis celebrated their 50th wedding anniversary this year. Don was preceded in death by his parents, Harry and Grace and a sister, Marjorie Pedersen. He leaves to mourn his passing his wife of 50 years, Phyllis of Ainsworth, NE; daughters, Brandi Pirnie and husband, Scott of Ainsworth, NE, Janet McNeel and husband, Larry of Lincoln, NE and Katherine Counts and husband, Vernon of Cozad, NE; step-daughters, Teresa Furden of Bernard, ME, Barbara Kloepping and husband, Doug of Lexington, NE and Peggy Funk and husband, Jerry of Conway, SC; 11 grandchildren and 12 great-grandchildren. Funeral Services were held on Tuesday, February 19, 2013 at the Zion Lutheran Church in Ainsworth, Nebraska. Pastor Georg Williams officiated over the service. Georgia Williams provided the music. Congregational selection of "The Old Rugged Cross" was provided as well as a CD selection of "Wings of a Dove" by Ferlin Husky. Pallbearers were, Vernon Counts, Tom Jones, Todd Boettcher, Larry McNeel, Curtis Bruha and Lenny Fernau. Honorary bearers were, all of Don's other family and friends. Burial was held at the Ainsworth Cemetery with Military Honors presented by the Ainsworth American Legion Post #79, Nebraska Army National Guard Funeral Honor Team. Hoch Funeral Home of Ainsworth was in charge of the arrangements. Memorials were suggested to the Zion Lutheran Church or to the Ainsworth American Legion Post #79.

Donald Park Skillman "Earl" was born on April 1, 1920 to Harry F. Skillman and Grace E. (Malia) Skillman on the farm east and north of Ainsworth known as Buffalo Flats. He passed away Saturday, February 16, 2012 at the Brown County Hospital... View Obituary & Service Information

The family of Donald P. Skillman created this Life Tributes page to make it easy to share your memories.