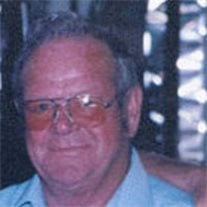 Donald E. Gordon, son of Reno and Hazel Utter Gordon, was born September 6, 1937, 3.5 miles north of Newport, and passed away on September 11, 2014 at the Avera Creighton Hospital in Creighton, Nebraska. He attended elementary and high school at Newport until his junior year and then graduated from Rock County High School in 1954 at age 16. He then entered the Army at Fort Bliss, Texas and served in Korea. He was discharged in 1957. When he returned home, he worked for Bob Greenfield Hay Company. In 1958, he went to Wheatland, Wyoming to work for Platte Valley Construction. On September 13, 1958, Don married LaDeane Moore and to this union 3 children were born, Steven, Alicia and Reno Dean. Don and LaDeane were involved with several business adventures. LaDeane lost her life tragically in a grain bin accident on December 23, 1974. Don purchased Gordon Oil, Trucking and Parts Company in 1976 and ran that business until his retirement. In December 1979, Don married Suzanne Moss and they resided on the ranch in Newport until December 1986. In leisure time, the hobbies he enjoyed were, bowling, boating, skiing, fishing, camping and hunting. He was also a proud member of the Bassett American Legion. For Don's final 24 years, his companion was Maria Walton. They loved to travel, play cards and dance. They resided in Weslaco, Texas, Niobrara, Nebraska and Bassett, Nebraska. He thoroughly enjoyed his children and grandchildren including his extended family of the Walton children and grandchildren. His faithful canine companion was PeeWee who brought him great joy. Don was preceded in death by his parents, Reno and Hazel Gordon, his wife, LaDeane, his brother, Jerry, and his son, Steven. He is survived by his companion, Maria Walton of Niobrara; daughter, Alicia Morrison and son-in-law Keith of Nebraska City, Nebraska; daughter-in-law, Faye Gordon of Lincoln, Nebraska; son, Reno Gordon and daughter-in-law Doris of Bassett; sisters, Trish Wedberg and husband John of Bishop, California, and Carolyn Doke and husband Bob of Bassett. Don is also survived by his nine grandchildren, six great-grandchildren along with numerous nephews and nieces. Graveside services with Military Honors being presented by the Bassett American Legion Post #123, were held on September 17, 2014 at the Newport Cemetery in Newport, Nebraska. Father Kitizo R. Khouya served as Celebrant for the service. Pallbearers were, Casey Hughes, Don Gordon, Brock Morrison, Lane Walton, Tyler Gordon and Grant Morrison. In lieu of flowers, memorials were directed to the Newport Fire Hall Project in Donald's name. Hoch Funeral Home of Bassett was in charge of the arrangements.

Donald E. Gordon, son of Reno and Hazel Utter Gordon, was born September 6, 1937, 3.5 miles north of Newport, and passed away on September 11, 2014 at the Avera Creighton Hospital in Creighton, Nebraska. He attended elementary and high school... View Obituary & Service Information

The family of Mr. Donald Eugene Gordon created this Life Tributes page to make it easy to share your memories.