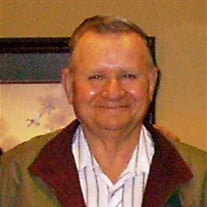 Donald L. Fredericksen, age 82 passed away on November 1, 2018 at his home in Long Pine, Nebraska. He was born on September 12, 1936 at Ainsworth, Nebraska to Chris and Clara (Stathom) Fredericksen. Donald loved to fish and go camping, anything that took him outdoors. He worked in the timber industry in Oregon before retiring and moving back to Long Pine. Don was a United States Marine and was proud to have served his country in the Korean War from 1953 to 1957. Don was married to Joan B. Koch in Claremore, Oklahoma. Don was preceded in death by his parents; his daughter, Ida L. “Leah” Fredericksen and stepdaughter, Sally Jo Hanson. He is survived by his wife Joan Fredericksen of Long Pine; daughter, April Hinrichs (Corvin) of Ainsworth; son, Mike Griffith (Laura) of Helena, Montana; stepsons, Willy Hoffman of Long Pine, John Hoffman of Cheyenne, Wyoming and Kevin Hoffman (Cheryl) of Eagle Point, Oregon, along with seven grandchildren, seven great-grandchildren, and many nieces, nephews, and cousins. Funeral Services were held on Tuesday, November 6, 2018 at the Assembly of God Church in Ainsworth. Pastor Gary Graesser officiated at the service. The special CD selections of “The Old Rugged Cross” by Alan Jackson, “White Lightning” by George Jones, “Blueberry Hill” by Fats Domino, and “When I Get Where I Am Going” by Brad Paisley and Dolly Parton, were played. Casketbearers were: Roy Snaza, Roger Magary, Cody Chase, Brent Deibler, Kade Gracey and Mike Rowley. Honorary Casketbearers were: All of Don’s other friends and family. Burial was held at the Grandview Cemetery at Long Pine with Military Honors being provided by the Long Pine Legion Post #260 and Bassett American Legion Post #123. Hoch Funeral Home was in charge of the arrangements. In lieu of flowers, memorials were suggested to the Long Pine American Legion Post #260.

Donald L. Fredericksen, age 82 passed away on November 1, 2018 at his home in Long Pine, Nebraska. He was born on September 12, 1936 at Ainsworth, Nebraska to Chris and Clara (Stathom) Fredericksen. Donald loved to fish and go camping, anything... View Obituary & Service Information

The family of Mr. Donald L. "Don" Fredericksen created this Life Tributes page to make it easy to share your memories.