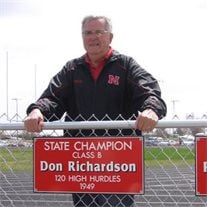 Donald E. Richardson was born to Charles Richardson Sr., and Alice (Werthner) Richardson on December 15, 1931. Don was the youngest of seven children. A brother and sister died in infancy, leaving four brothers and 1 sister as survivors. Don attended Ainsworth High School and graduated in 1949. During his four years in high school, Don was known as an outstanding athlete, which included; football, basketball, and track. He attended the University of Nebraska for one and a half years. While at the University, he became a member of the Alpha Tau Omega Fraternity and met who was to become his partner for life, Luanne Watkins of Curtis, Nebraska. In 1951, Don enlisted in the U.S. Navy served honorably committing for four years. During his year in the Navy, two epic events happened. On June 16, 1952 he and Luanne were married, and in 1953, their oldest daughter, Pamela was born. After their marriage, Dona and Luanne lived in Alameda, California and Bremerton, Washington, where he was assigned to serve on the USS Yorktown Aircraft Carrier as the Flagman. After his discharge from the Navy, Don went immediately to work to what was then called the Commercial National Bank in Ainsworth. In the year of 1956, Don and Luanne were blessed with the birth of their second daughter, Dawn Denise. During his 41 years at the bank, he went from book work status to Vice President. During those years, Don also served as the President of the Chamber of Commerce, President of the Golf Association, and Exalted Ruler BPOE Elks. Don retired in 1996. After a month of "REST" Don answered a phone call from Bret Younkin asking him if he'd be interested in working at the Ford Garage. Most of you know what his answer was, and consequently he stepped into a job he loved for 20 years. Don is preceded in death by both parents, Charles Sr. and Alice Richardson, brother, Albert Richardson and wife Alice, sister, Aline (Richardson) and Bob Hill, brother, Charles Jr. "Bulldog" and wife Betty, brother Glenn "Shorty" Richardson and wife Marjorie; nieces, Sue and Mary, and nephews, Steve and Bob. He is survived by his wife Luanne of Ainsworth, daughters, Pamela Richardson of Orlando, Florida, and Dawn Denise Robbins and husband Dave of Lexington, Nebraska, along with his three grandchildren, and six great-grandchildren, nieces, nephews, and other family members. A Celebration of Life service was held at Hoch Funeral Home in Ainsworth. Pastor Bruce Beebout officiated the service. The Eulogy was given by Donnie's granddaughter, Abby Dobbins. A Military flag presentation was given by the Ainsworth American Legion Post #79. Inurnment will be held at a later date at the Ainsworth Cemetery. In lieu of flowers, memorials are suggested to the family for a memorial bench at the Ainsworth Municipal Golf Association in Donnie's name.

The family of Mr. Donald E. "Donnie" Richardson created this Life Tributes page to make it easy to share your memories.