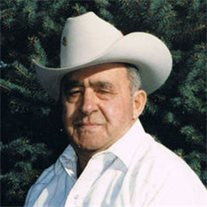 Donald Ray Rossenbach was born to John and Alma (Graber) Rossenbach on September 11, 1927 at Ainsworth, Nebraska. At the age of four, he started country school at District #21, Norden, Nebraska, riding horseback with his mother each way until he could saddle a horse by himself. He grew up on the family farm and ranch southeast of Norden, later attending Keya Paha County High School, graduating at the age of 16 with the class of 1944. Don enlisted in the United States Air Force in August of 1950. He served his country as a gunnery instructor attaining the rank of Staff Sergeant while stationed at Lowry Air Force Base, Denver, Colorado. He was united in marriage to Mary Anne Sherman on December 29, 1952 at St. Nicholas Catholic Church, Valentine,Nebraska. They lived in Denver until Don's honorable discharge on September 4, 1953. At that time, they returned to the Norden community where they engaged in farming and ranching with his parents. Don and Mary Anne bought the adjoining farm and ranch in 1956 where they lived, worked and raised their family before moving into Springview, Nebraska in 1975. It was then that Don started Don's Tax and Accounting Service. After selling the ranching operation in the late 1970s, he became a licensed insurance agent, adding those services to his business. Always one to welcome a challenge, Don decided to learn the newspaper business and purchased the Springview Herald which he operated until his retirement in the mid-1990s. In 1997, he and Mary Anne moved to Harlingen, Texas. During their years there, Don had the opportunity to buy a local business in nearby San Benito, Texas. He renamed it Don's Liquor and enjoyed that venture until selling it in 2011, due to health concerns. Mary Anne died on January 19, 2012. In May of that year, Don moved to Valentine, Nebraska where he has since made his home. Throughout his life, Don was active in the communities that he called home. He served on the Keya Paha County Fair Board, the School Board, PCA Board, Keya Paha County Coop Board and was a member of the American Legion Post #98. He was also a youth baseball coach in Springview. Seeing a need for an announcer's box for the baseball and football fields in the early 1970s, he took pleasure in building and donating one. He was also instrumental in organizing and developing Cub Creek Recreation Area-west-of Springview for the community. While living at Norden and in Springview he was a long time member of St. Pius X Catholic Church in Ainsworth. They were members of St. Anthony's in Harlingen and most recently he attended St. Nicholas in Valentine. Some of Don's greatest enjoyments included: golfing, collecting toy tractors, researching family genealogy, going for drives, and traveling in the RV throughout the western United States with Mary Anne. His family and dear friends can attest to his having the heart of a farmer. Even after they moved to town, Don could often be found tending to his lawn, garden, flowers and strawberry patch. He had an eye for lawn and garden landscaping and it always turned out well where ever they lived. Surviving Don are his three sons: Dennis of Ainsworth, Nebraska; Roger of Emmett, Idaho; John and wife Connie of Ainsworth, Nebraska; a daughter Denise and husband Tim Anderson of Twin Valley, Minnesota; eleven grandchildren, twenty-seven great grandchildren, and two great-great grandchildren; Sisters-in-law Loretta "Snooks" Melcher of Valentine, Nebraska and Mary Lou Kerr of Valentine Nebraska; Brothers-in-law George Sherman of Valentine, Nebraska and Bill Sherman of Crookston, Nebraska, and several nieces and nephews. Don was preceded in death by his wife Mary Anne, parents, a brother John Alfred, sister-in-law Hazel Peterson, brother-in-law Ron Melcher, and a great-great granddaughter Macy. In lieu of flowers, Don requested memorials to be made to Children's Hospital and Medical Center Omaha -Neonatal Intensive Care Unit. A Rosary Prayer Service was held at Hoch Funeral Home on Tuesday, April 4, 2017. Funeral Services were then held on Wednesday, April 5, 2017 at the St. Pius X Catholic Church in Ainsworth. Celebrants for the service were, Father Phil Flott and Father Abraham Kaduthodiyil. Music was provided by DeAnn Morse and Lorraine Worth. Special music selections provided were, "Old Rugged Cross" and "How Great Thou Art." Pallbearers were all of Don's grandchildren. Honorary bearers were, Duane McCormick, Meredith Worth, Enid Worth, Donna Ludemann, and Karen Kurzenberger. Burial followed at the Mt. Hope Cemetery near Springview with Military Honors being provided by the Springview American Legion Post #98. Hoch Funeral Home of Ainsworth was in charge of the arrangements.

Donald Ray Rossenbach was born to John and Alma (Graber) Rossenbach on September 11, 1927 at Ainsworth, Nebraska. At the age of four, he started country school at District #21, Norden, Nebraska, riding horseback with his mother each way until... View Obituary & Service Information

The family of Mr. Donald R. "Don" Rossenbach created this Life Tributes page to make it easy to share your memories.