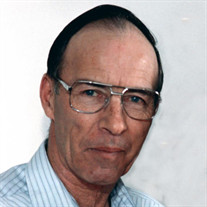 Donald “Don” Gene Denny was born on February 25, 1931 in Elsmere, Nebraska to Gale and Mila (Hollopeter) Denny and passed away on November 30, 2021 at the Brown County Hospital in Ainsworth, Nebraska at the age of 90 years, nine months and five days. He was the oldest of five children. Don was united in marriage to Darlene L. Marvin on May 20, 1949 at the Methodist Church in Bassett, Nebraska. To this union three children were born - Linda, Jerry and Bonnie. They lived in Ainsworth four years and then moved to Long Pine, Nebraska in 1953. In 1973, they moved back to Ainsworth. Don was a trucker earlier in their marriage and then with a partner started a construction company. After that, he went to work for Snyder which was later Petrolane and later Co-op. He was known as one of the best service technicians in the area. Don and Darlene proudly sold Jayco campers because Don thought they were the best built campers. He also repaired campers. Their business was Denny's Camper Sales and Service and his customers knew they could count on Don to treat them good. He also built the home they have lived in since 1973. When their children were growing up they took many fun family vacations in the car. Some of their travels took them to Oregon, California (Disneyland), South Dakota, New Mexico and across the border into Mexico. Don and Darlene spent a lot of spare time playing cards, going fishing and camping. They usually went camping to Merritt Reservoir. They enjoyed spending winters in Apache Junction, Arizona for 22 years until Darlene passed away. They generously volunteered their time to help with the grandchildren. He was preceded in death by his parents; his wife, Darlene in 2012; brothers, Ray and an infant brother; grandsons, Rick Denny and Shawn DeWeese. Survivors include daughters, Linda (Dennis) DeWeese of Long Pine, Bonnie (Roger) McCartney of Ord, Nebraska; son, Jerry (Connie) Denny of Ainsworth; grandchildren, Suzanne, Donnie, Vance, Erica, Bryan, Rob & Brad; eighteen great-grandchildren and seven great-great-grandchildren; brother, Garry (Naomi) Denny of Ainsworth; sister, Shirley Beasley of Long Pine; and sisters-in-law, Lillian Denny of Newport, Nebraska, Dorothy Fredrickson of Hobbs, New Mexico, LaRayne (Doug) Halligan of Ord, Nebraska, Hazel Langer of Gettyburg, South Dakota and brother-in-law, Larry Marvin of Fremont, Nebraska. Funeral Services were held on Saturday, December 4, 2021 at the Hoch Funeral Home in Ainsworth with Pastor Martin Leeper officiating at the service. The CD selections of “Old Rugged Cross” by Tennessee Ernie Ford and “Amazing Grace” by the Statler Brothers were played. Interment followed in the East Park Cemetery in Ainsworth. Casket Bearers were: Donnie Denny, Vance Denny, Bryan McCartney, Brad McCartney, Kole Denny, Brody Denny and Dontay Denny. Honorary Casket Bears were all of Donald’s other Grandchildren and Great-Grandchildren. Memorials were suggested to the Brown County Ambulance Association in Donald’s name.

The family of Donald G. Denny created this Life Tributes page to make it easy to share your memories.