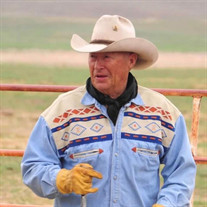 Don Earl Hollenbeck was born August 13, 1935, to Beryl & Cathern Hollenbeck in Ainsworth, NE. He was raised on his family’s ranch southwest of Bassett. Don attended a one room schoolhouse for his grade school education and graduated from Rock County High School in 1953. Don was drafted into the U.S. Army in 1958. He received his basic training at Ft. Carson, CO and then was stationed in Hawaii for 2 years before being honorably discharged in 1960. Don earned the sharpshooter badge. Don and Sharilyn Sharp were united in marriage on August 27, 1960, in Johnstown, NE. To this union two sons were born, Wayne and Mart. Don and Sharilyn continued to live on the ranch until 1995 when they moved to Long Pine, NE. In Don’s younger years, he belonged to the Bassett American Legion baseball team and would always say with the arrival of a new grandkid, “You know, a left handed kiddo would make a great pitcher!” Don was also a member of the Long Pine Roping Club where they competed in several local towns. Among his many passions were flying his Piper J-3 Cub airplane to check pastures & flying in to pick up the boys from school when the snow was too deep. He enjoyed raising the best greyhounds and having the ability to know his cattle without the aid of an ear tag. Don was a very proud dad and grandad, there were very few sporting events that his boys and grandkids were competing in that he did not attend. He was a very caring and giving man to all of them. Don especially loved Christmas time when we would all sit down and play cards. It was no surprise that he would bid 10 on a 4 hand and make it! He loved his sports and took deep pride in helping Hollenbeck Rodeo Co. Don passed down his enthusiasm for ranching to his two sons and grandson. Don passed away on October 17, 2020, at the Rock County Hospital Long Term Care in Bassett, NE. Don was preceded in death by his parents, Beryl and Cathern Hollenbeck and brother Gary Hollenbeck. He is survived by his wife, Sharilyn of 60 years; sons Wayne (Jackie) Hollenbeck and Mart (Dee) Hollenbeck both of Bassett. Four grandchildren: Fallon (Brent) Woods of Tripp, SD; Brooke (Pat) Riha of Stuart, NE; Chase (Melissa) Hollenbeck of Bassett and KayCee Hollenbeck and Rob Parker of Bassett. Nine great grandchildren, sister, Donna(Frank) Guilfoil of Lincoln, CA; sisters-in-law, Carol Hollenbeck of Bassett, Sherri Sharp and husband Bill Stevenson of Rapid City, SD; Shirley (Oliver) Painter of Rapid City, SD, nieces and nephews. Memorial Services for Don will be held at a later date. Those wishing to send memorials, they can be made out to Don Hollenbeck for a future designation and may be sent to Sharilyn Hollenbeck 103 Oak Lane Long Pine, Nebraska 69217.

Don Earl Hollenbeck was born August 13, 1935, to Beryl & Cathern Hollenbeck in Ainsworth, NE. He was raised on his family&#8217;s ranch southwest of Bassett. Don attended a one room schoolhouse for his grade school education and graduated... View Obituary & Service Information

The family of Mr. Don E. Hollenbeck created this Life Tributes page to make it easy to share your memories.