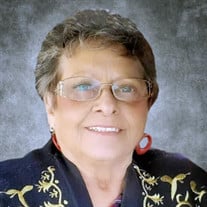 Dixie Lou (Boyd, Freeman) Worth was born April 7, 1942 to Merlon and Irene (Bean) Boyd at Springview, NE. She was the fifth of eight children. Dixie passed away July 4, 2020 at the age of 78 at Long-Term Care, in Bassett, NE. Dixie attended grade school and high school at District 56 in Springview, NE. In her high school years, she played drums in the band, played volleyball, along with other extracurricular activities in high school. She graduated from Keya Paha County High School in 1960. As a young girl Dixie loved babysitting and will be remembered as fun loving and caring. After graduating Dixie moved to Denver with her dear friend Janice and began working for an insurance agency. It was in Denver that she married Maynard (Buzz) Freeman. They moved to Burke, SD where she worked for an insurance agency. They were blessed with two beautiful children, son Shawn Scott and daughter JoRene LaMae. In 1972 they moved to Springview, and Dixie started working in the assessor’s office. This was the beginning of her career. The family moved to Ainsworth, NE where she advanced her career to Deputy Assessor. In 1984 she met her 2nd husband, Larry Worth, and moved to Lincoln, NE. In this union Dixie was fortunate to inherit three wonderful stepchildren: Debra Ann, Gregory Dean, and Brian Ray. Dixie was successful in the Assessor’s office in Lincoln as supervisor of the Personal Property and Homestead Exemption Department. While living in Lincoln, Dixie and Larry adopted their daughter Kristina Dixie Eggerling. In 2001 after Larry’s retirement, the family made their home in Springview, NE allowing their daughter, Kristina, the experience of a smaller school and to care for Dixie’s aging parents. Dixie enjoyed Bible studies, knitting, gardening, and being the caretaker of her parents along with many other activities. She also enjoyed cooking, baking, and conjuring up her own creations. Family will always remember camping at Fort Randall and enjoying her homemade bagels with her famous peanut butter and honey “concoction”. She always had a treat for those who stopped by for a cup of java. Her quick wit and easy laugh always brought a chuckle or two. Dixie had a special love for precious little children, whom she considered so precious, and they seemed to feel her love for them. Dixie's grandson Thomas, as a small little boy, wrote the following prayer which found its home on her refrigerator. "God our Father. God our Father. Once again. Once again. We bow our heads to praise you; we bow our heads to praise you. Amen. Amen. God is great. God is good. And we thank Him for our food. Amen." Granddaughter, Elizabeth, loved her grandmas banana bread so much she created a framed picture of her recipe including drawings of all ingredients. This picture decorated grandmas’ kitchen wall. Family was most important after her love for Jesus Christ. Dixie accepted Jesus Christ as her Lord and Savior in 1970. The Baptist Church in Valentine, NE baptized her in the Niobrara River. Dixie was preceded in death by her father Merlon, mother Irene, brother Dwayne Boyd, sister Dea (Boyd) Graesser, and brother-in-law Ray Vaughn. She is survived by her husband Larry, Springview, NE; son, Shawn Scott Freeman (Julie) and two grandchildren Elizabeth Grace and Thomas Gabriel, Ozark, MO; daughter, JoRene LaMae (Freeman) Herron and three grandchildren, Kashonda Lachey, Tigger and Joseph Maleek, Springfield, MO; daughter Kristina Dixie Eggerling, Springview, Nebraska. Dixie is survived by three step children; daughter, Debra Ann Black, grandsons Mitchell and Jarrett, Lincoln, NE; son, Gregory Dean (Nancy)Worth, Overland Park, KS; granddaughters Bailey (C.J.) Grover; Ella (Noah) Roth; son Brian Ray Worth, Downers Grove, IL; grandsons Kyle and Hayden. She is also, survived by her brother, Delbert (Wilma) Boyd, Sequim, WA; sisters Delpha (George) Fairbanks, White River, SD, DeAnne Vaughn, O'Neill, NE, Dorene Boyd, LaSalle, CO and Della Boyd, Winner, SD; sister-in-law Louise (Lawrence) Boyd, Stanton, NE, along with great-grandchildren, numerous nieces, nephews, cousins, and dear friends. Funeral Services were held Thursday, July 9, 2020 at the New Hope Community Church in Springview with Pastor Tim Wyrick and Pastor Scott MCClellen officiating. Music was provided by Kayla Schrantz, with the congregational selections, “Amazing Grace,” and “The Old Rugged Cross.” Special Saxophone selection of “How Great Thou Art” was provided by Stan Libolt. Eulogy was given by Larry Shepperd. Casket Bearers were, Brad Mundorf, Ben Weston, Don Graham, Travis Mundorf, Ernest Hallock and Merlon Fairbanks. Interment followed in the Mt. Hope Cemetery in Springview. In lieu of flowers, Dixie’s family suggests donations to St. Jude Children’s Hospital, 501 St. Jude Place, Memphis, TN 38105. Please put in memory of Dixie Worth. Hoch Funeral Home of Ainsworth was entrusted with the service arrangements. Online condolences may be made to the family at www.hochfuneralhome.com.

Dixie Lou (Boyd, Freeman) Worth was born April 7, 1942 to Merlon and Irene (Bean) Boyd at Springview, NE. She was the fifth of eight children. Dixie passed away July 4, 2020 at the age of 78 at Long-Term Care, in Bassett, NE. Dixie attended... View Obituary & Service Information

The family of Dixie L (Boyd) Worth created this Life Tributes page to make it easy to share your memories.