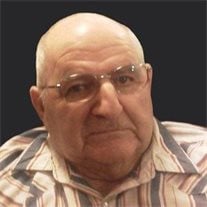 Melvin Dewayne Buoy was born October 10, 1938 to John H. and Phyllis V. (Geist) Buoy in Burwell, Nebraska. He passed away January 12, 2013 at the Parkside Manor in Stuart, Nebraska at the age of 74 years, three months and two days. Dewayne was the youngest of seven brothers: Roy, Floyd, Mervin, Harry, Eldon and Jack. He grew up on the family homestead in Rock County until moving and graduating from high school in Long Pine, Nebraska. Dewayne married Margaret Strelow on June 27, 1958 at Bassett, Nebraska and to this union four children were born: Roxanne, Mervin, Roger and Mark. Dewayne was a rancher his entire life in Rock County. He enjoyed working with cattle, haying and the daily jobs to keep a ranch working. He and Margaret could be found working side by side no matter what the job was, whether it was at the Lackaff Ranch or his own ranch later in life. He enjoyed going to the rodeo's with his sons and grandchildren. Dewayne always had a smile and a little wink when he was teasing his grandchildren or friends. Dewayne and Margaret shared their retirement living in Bassett, spending time with family and friends. Dewayne is survived by wife of 54 years, Margaret "Maggie" of Bassett; daughter, Roxanne and husband, Tom of Fort Collins, Colorado, Mervin and wife, Jan of Bassett, Roger and wife, Carol of Kearney, Nebraska, Mark and wife, Julie of North Platte, Nebraska; along with nine grandchildren and seven great-grandchildren; a brother, Harry and wife, Faye of Bassett; sisters-in-law, Lynn Strelow of Bassett, Sylva Dixon of Burwell, Elva Buoy of Long Pine and Kathy Buoy of Park City, Kansas; and many nieces and nephews. He is preceded in death by parents, parent's in-law, five brothers, two brothers-in-law and three sisters-in-law. Funeral Services were held on January 17, 2013 at the St. Peter Lutheran Church in Bassett, Nebraska with Pastor Melody Brink officiating over the service. Music was provided by JoAnn Swanson, Stanley Larson and Ev Armstrong. Vocal selections of "The Old Rugged Cross" and "How Great Thou Art" along with congregational selections of "Amazing Grace" and "Abide With Me" were provided. A poem entitled "Tall Tales" was provided by Rick Buoy. Pallbearers were, Rick Buoy, Darrell Buoy, Jerry Buoy, Monte Strelow, Ed Qualley and Bryce Buoy. Honorary bearers were all of Dewayne's other family, his friends and neighbors. Burial was held at the Bassett Memorial Park Cemetery in Bassett, Nebraska under the direction of Hoch Funeral Home. Memorials were suggested to the family in his name for future designation.

Melvin Dewayne Buoy was born October 10, 1938 to John H. and Phyllis V. (Geist) Buoy in Burwell, Nebraska. He passed away January 12, 2013 at the Parkside Manor in Stuart, Nebraska at the age of 74 years, three months and two days. Dewayne... View Obituary & Service Information

The family of Dewayne Buoy created this Life Tributes page to make it easy to share your memories.