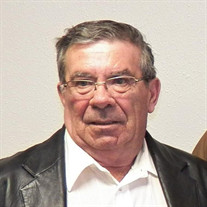 Dennis Rossenbach, age 65, Ainsworth, Nebraska, died suddenly, Friday, May 24, 2019 at the Brown County Hospital in Ainsworth. Dennis Duane Rossenbach was born to Donald and Mary Anne (Sherman) Rossenbach on October 12, 1953 in Valentine, Nebraska. He grew up on the family farm and ranch east of Norden, Nebraska, attending country school at District #21 in Norden. Following his graduation from Keya Paha County High School with the Class of 1971, he furthered his education in Agri-Business at Fairbury Junior College at Fairbury, Nebraska. Denny returned to the family ranch in 1973. On September 25, 1975, he married Robin Miller in Gregory, South Dakota. This union was blessed with a son, Don "Donnie" and a daughter, Jacqueline "Jacque". Robin and Denny made their home at Norden and later in Springview, Nebraska, where he continued working for area farmers, which included a hog confinement and, for a time on a custom combine crew traveling throughout the Midwest. In 1993, he moved to Ainsworth and was employed as a driver for Kaiser Trucking until relocating first to Crookston, Minnesota, and then West Fargo, North Dakota working various jobs until his health began to fail. Upon his retirement, he returned to Ainsworth and has made his home at Cottonwood Villa there for the last few years. While living in Keya Paha County, he was involved in his community by serving on the fair board and the school board. Welding was an enjoyment for him. The many brightly lit Christmas stars he created and gave as gifts will be treasured by his family for years to come. Denny also loved to visit, especially sharing memories of years past. He had a special gift for remembering names, dates and events and reminiscing was a favorite past time. Preceding him in death were his parents, Don and Mary Anne Rossenbach. Dennis is survived by his son, Donnie, and daughter, Jacqueline Rossenbach, both of Belleville, Illinois; four grandchildren, Brandon Moran and Chastity Waldner of Belleville, and Aspen Rossenbach and Denise Rossenbach of Tomah, Wisconsin; brothers, Roger Rossenbach of Emmett, Idaho and John (Connie) Rossenbach of Ainsworth; sister, Denise (Tim) Anderson of Twin Valley, Minnesota; and several nieces and nephews. May God Bless the Memory of Denny Rossenbach. Funeral Services were held Wednesday, May 29, 2019 at Hoch Funeral Home in Ainsworth with Pastor Gary Graesser officiating at the service. The CD Selection of “Turn Your Eyes Upon Jesus” by Alan Jackson was played and a guitar vocal/selection of “Amazing Grace” was provided by Lorraine Worth. Special memories were shared by family and friends. Casketbearers were: His Loving Family. Burial followed in the Mt. Hope Cemetery at Springview under the direction of Hoch Funeral Home. In lieu of flowers, memorials were suggested to the family in his name for future designation.

The family of Mr. Dennis D. Rossenbach created this Life Tributes page to make it easy to share your memories.