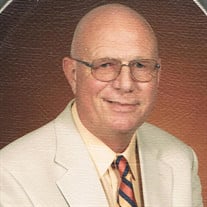 Dennis Ruben Graf was born February 21, 1945 to Ruben and Winona (Stevens) in Norton, KS. He was raised on a farm outside of Almena, KS. He was the oldest of four children. He attended and graduated from Almena High School in 1963. Following graduation, he worked for Evans Grain Company, where he started his life-long, agricultural career. He also spent time in the Army National Guard. He continued to work hard and proceeded to work his way up to management. Dennis took great pride in his work. While Dennis was manager at Culver Agri-Services in Culver, KS, he met his wife, Judy. On February 14, 1981 he and Judy were united in marriage. Together they had five children. Later that year, the family moved to Bassett, NE where he managed Bassett Grain in Long Pine, NE. He continued to work at Bassett Grain for nearly a decade until the railroad was discontinued. He then worked for Coash, Inc there. Dennis served on the Bassett Grade School and Rock County High School Boards of Education, Rock County Hospital Foundation, and was currently serving as the Chairman of Board of Trustees for the Bassett United Methodist Church. He was also a member of the Masonic Lodge and the American Legion. In 2000, Dennis and Judy moved to Kensington, KS where he managed Pro-Ag Marketing. He worked there until his retirement in 2009. After he and Judy retired, they moved back to Bassett to be closer to family. During retirement he enjoyed golfing, camping, attending grandchildren’s activities, and going south for three months during the winter. His biggest enjoyment during retirement was taking care of, and spoiling, his youngest grandchild, Kooper. She brought a renewed twinkle to his eye and filled his heart with joy. Until the time of his death, Dennis also enjoyed driving semi-truck hauling grain for his son-in-law. Dennis passed away, surrounded by his family, November 17, 2020 at CHI Good Samaritan Hospital in Kearney, NE due to complications from COVID-19. He was preceded in death by his parents. Survivors include: wife Judy Graf of Bassett; children; Rodney Graf and wife Amy of McHenry, IL, Troy Graf and wife Jackie of Bassett, Tami Cosgrove and husband Keith of Bassett, Tonya Thompson and husband Curtis of Liberal, KS, and Tricia Anderson and husband Joey of Bassett; 15 grandchildren and 2 great-grandsons; sisters, Joyce Lofgreen and husband Dennie of Norton, KS, Julie Graf-Frye and husband Steve of Longmont, CO; brother Dr. Steve Graf of Almena, KS; sister and brother-in-law, Iliene and Don Smither; sisters-in-law, Arlene Girton, Rosy Girton, and Donna Girton; nieces, nephews and other family members; and a host of friends. A Private Family Memorial Service will be held on Wednesday, November 25, 2020 at 10:30 AM in the Bassett United Methodist Church with Pastor Jenice Epp officiating at the event. Inurnment followed in the Bassett Memorial Park Cemetery. A Public Celebration of Life Service is being planned for the spring of 2021. Memorials are suggested to the Bassett United Methodist Church, the Rock County Hospital Foundation or to the Rock County Senior Center. Hoch Funeral Home of Bassett is assisting the family with arrangements. A Note for the Celebration of Life Services, the family recommemends casual attire for the event.

Dennis Ruben Graf was born February 21, 1945 to Ruben and Winona (Stevens) in Norton, KS. He was raised on a farm outside of Almena, KS. He was the oldest of four children. He attended and graduated from Almena High School in 1963. Following... View Obituary & Service Information

The family of Dennis R. Graf created this Life Tributes page to make it easy to share your memories.