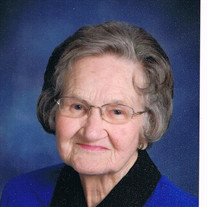 OBITUARY OF DELORIS M. (STAHL) FOX Deloris Maxine (Stahl) Fox was born to Harry L. and Bessie O. (Fox) Stahl on October 6, 1926 at Bassett, Nebraska and passed away on February 13, 2021 at Arbor Care Center in O’Neill, Nebraska at the age of 94 years, four months and seven days. The family lived on a farm in Rock County. Deloris attended a country school through the 8th grade. After that, she lived in Bassett and worked at the Abbenhaus Bakery. Several years after she started working at the bakery, the family moved to Newport where she met Glenn Lawrence Fox. They were married in O’Neill on October 26, 1947. They had two children, Glenn Lee and Linda. They lived most of their marriage in Newport. Glenn passed away suddenly in 1976. Deloris was an excellent cook and especially enjoyed baking and decorating wedding cakes. She made many of the wedding cakes in the area. She also enjoyed sewing and made most of their clothes, and did alterations for many and custom made clothing. Several years after Glenn’s death, Deloris started working at the Bethesda Care Center in Bassett. When a cook position became available, she started cooking there. Later, she then went to work as a cook at the Ainsworth Nursing Home. When Bassett was going to open their Senior Center, they asked her to be the cook there which she did until she retired the end of 2000. Deloris got her GED from Rock County High School in 1981. She then drove to Norfolk after work to take night classes at Northeast Community College. She spent many hours with her grandchildren and enjoyed every minute it. She would take them on little vacations which they would all enjoy. The kids all looked forward to the swimming pools at the hotels. Deloris lived in her home in Newport until her health failed in April of 2018 and she went to the Rock County Hospital Long Term Care, and in July of 2018 she entered the Arbor Care Center in O’Neill where she resided until her passing. Deloris was preceded in death by her husband, Glenn; a grandson, Scott Knoetzel; her parents and siblings, Jimmy in infancy, John, Glenn, Clifford, Alfred, Dorothy Wilkinson, Mary Harding, Marjorie Gale and Bessie Orr. She leaves to mourn her passing, her son, Glenn Lee Fox and wife Deb of Newport, her daughter, Linda Knoetzel and husband, Dave of Bassett; three grandchildren Jaimie and husband Chris Petersen, Shelley and husband, Todd Morse, and Brett Knoetzel and wife, Christa; and great-grandchildren, Cassie and Benjamin Morse, Zachary Petersen and Cadence Knoetzel. Deloris is also survived by a sister, Florence Nelson of Mesa, Arizona; and two brothers-in-law, Clayton Fox of Newport and Jim Fox of Valentine, along with numerous nieces, nephews and other family members. Private Graveside Services were held on Saturday, February 20, 2021 in the Bassett Memorial Park Cemetery with Pastor Wayne Owens officiating. Memorials were suggested to the Rock County Senior Center in Deloris’ name. Hoch Funeral Home of Bassett was in charge of arrangements and online condolences may be made to the family at www.hochfuneralhome.com.

OBITUARY OF DELORIS M. (STAHL) FOX Deloris Maxine (Stahl) Fox was born to Harry L. and Bessie O. (Fox) Stahl on October 6, 1926 at Bassett, Nebraska and passed away on February 13, 2021 at Arbor Care Center in O&#8217;Neill, Nebraska at the... View Obituary & Service Information

The family of Mrs. Deloris M. (Stahl) Fox created this Life Tributes page to make it easy to share your memories.