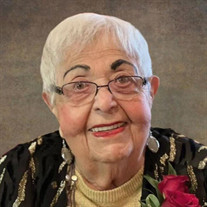 Delores K. (Abraham) Stec passed away in Grand Island, NE at the CHI Health-St. Francis Hospital on April 24, 2022, with her family by her side. Delores, formally of Ainsworth, NE, was the daughter of Dell and Genevieve (Saba) Abraham, born February 19, 1922. Delores attended school in Ainsworth and graduated in 1940. She was very proud of her Lebanese heritage and Catholic faith. After graduation, she worked in her father’s store and loved it. She and her sister Ramona went to work with her mother, as there were no babysitters in those days. In 1949 she married Joseph J. Stec and were blessed with three wonderful sons: Paul, John and Steve. She loved being a mom and was happy to stay at home with them. She went back to work in the store that her and Joe started, known as Stec’s Toggery in 1962. When Joe retired in 1977, she convinced Mode O’Day to open a store in Ainsworth. Enjoying her love of sales, she managed it for the next 13 years. Delores was very active in the community. She served five years on the school board, President of the PTA, President of the Altar Society at St. Pius X, member of Does, a member of the Chamber of Commerce and was voted Sales Lady of the Year. She was also President of Ainsworth Jr. Women’s Club in 1962. It was suggested to her from an Ainsworth couple, that they would like to see a Christmas pageant be held on the first day of every December. Upon presentation and vote, it passed to move forward with the pageant. Some of the priests gave old vestments to be used for pageant apparel. Many local people took part in the pageant. After 50 years, it is still presented in some capacity with a few changes to include relocating it inside. Delores was also an instigator with decorating the park to help exemplify that Ainsworth was and still is, the Christmas City of the Sandhills. Delores spent the last years of her life in Grand Island, residing at Riverside Lodge Retirement Center for four years, then later at Tiffany Square Care Facility for the past eight years. She enjoyed playing cards, including pitch and bridge, dancing, cooking her famous Lebanese food, decorating her house and entertaining family and friends. She was preceded in death by her parents Dell and Genevieve Abraham; husband, Joseph Stec; sister, Ramona Kamas; brother-in-law, George Kamas; niece, Margaret Ann Kamas and great-grandson, Trace Ritchie. She is survived by her sons, Paul (Deb) of Kearney, NE, John of Ainsworth, Steve (Beckie) of Grand Island; sister-in-law, Helen Stec of Bassett, NE; several nieces and nephews, including special nephews, Jim (Donna) Kamas, Dan Kamas and special niece, Jeannie Stec. She was very proud of her eight grandchildren and fifteen great-grandchildren. Funeral Service was held on Friday, April 29, 2022 in the St. Pius X Catholic Church with Father Mike Wetovick as Celebrant. Music was provided by DeAnn Morse with the congregation singing: “Here I Am Lord,” “One Bread One Body,” “Supper Of The Lord” and “On Eagle’s Wings.” The readings were done by CJ Stec. Casket Bearers were: Travis Stec, Zachary Stec, CJ Stec, Jim Kamas, Daniel Kamas, Tim Ritchie, Cory Cutchall and Casey Clausen. Honorary Casket Bearers were: All of Delores’ Other Grandchildren and Great-Grandchildren. Interment was in the Ainsworth Cemetery. Memorials were suggested to the family for a future designation. Hoch Funeral Home of Ainsworth was in charge of arrangements.

Delores K. (Abraham) Stec passed away in Grand Island, NE at the CHI Health-St. Francis Hospital on April 24, 2022, with her family by her side. Delores, formally of Ainsworth, NE, was the daughter of Dell and Genevieve (Saba) Abraham, born... View Obituary & Service Information

The family of Delores K. (Abraham) Stec created this Life Tributes page to make it easy to share your memories.