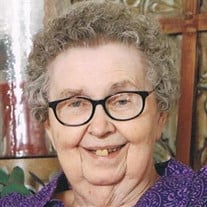 Delores D. Ammon, 93 of Bassett, passed away January 16, 2020 at the Rock County Hospital Long Term Care in Bassett. She was born January 12, 1927 to Henry and Nellie (Drews) Schroeder at Pender, Nebraska. Delores married Harold Ammon on March 7, 1948 at Pender at her parents’ home after a six-month courtship. Harold and Delores purchased the homestead of John Rufus Ammon and lived on that ranch for 50 years. That ranch was just one-fourth of a mile from the ranch where Harold was born. Harold and Delores were blessed with five children, 13 grandchildren and 22 great-grandchildren. Delores enjoyed sewing, quilting, embroidery, putting puzzles together and a good game of cards, especially if she could win and she also enjoyed spending time with her family. Delores was a member of the Sybrant Community Church where she and Harold were instrumental in helping to move the church to its current location in 1963. She was a 4-H leader, bible school organizer and church treasurer for many years. She also belonged to the Helping Hand Club for 70 years. Delores moved into the Long Term Care in February of 2016 after a fall in January of that year. She never complained and loved her stay there. She so appreciated everyone who worked there. Delores was preceded in death by her parents; her husband, Harold; sister, Mae Westerhold and her husband; brother-in-law, Roland Hensen; and son-in-law, Dan Bell. Delores is survived by her children, Denise (Ron) Tech of Alda, NE, Keith (Lorraine) Ammon of Bassett, Shirley Bell of Gillette, WY, Gerald Ammon of Bassett, and Rhonda (Jeff) Wulf of Kearney, NE. She is also survived by her grandchildren, Lori (Mike) Freilinger, Jeff (LeAnn) Tech, Sandi (Brian) Carson, Kurt Ammon, David (Danielle) Bell, Danna (Adam) Burchess, Richard (Heidi) Bell, Rachael (Josh) Peterson, Paul (Kierstyn) Bell, Tony (Maylin) Ammon, Misty (Ryan) Zulkoski, Jenna Wulf, and Jacob Wulf. Also surviving her are 22 great-grandchildren; one sister, Mardel Hensen of Oklahoma; a sister-in-law, Eleanor Ammon of Bassett; along with many nieces, nephews and a host of other family members. Funeral Services were held on Tuesday, January 21, 2020 at the United Methodist Church in Bassett with Pastors David Randall and Alex Turman officiating at the services. Music was provided by Faye Smith with Jeff and Rhonda Wulf singing “Take My Hand Precious Lord.” David, Paul and Richard Bell sang “The Old Rugged Cross” and the congregation sang “What A Friend We Have In Jesus.” Pallbearers were: David, Richard and Paul Bell, Kurt and Tony Ammon and Jeff Tech. Honorary Pallbearers were: Misty Zulkoski, Jacob Wulf, Danna Burchess, Rachael Peterson, Sandi Carson, Lori Freilinger and Jenna Wulf. Memorials were suggested to the family in her name. Interment was in the Sybrant Cemetery near Bassett under the direction of the Hoch Funeral Home of Bassett. Online condolences for the family may be left at: www.hochfuneralhome.com.

The family of Delores D. (Schroeder) Ammon created this Life Tributes page to make it easy to share your memories.