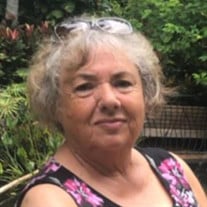 Dee Anne Nilson, 72, of Springview, NE and formerly of Rapid City, SD passed away on November 23, 2021 at Rock County Hospital in Bassett, NE. Dee was born on July 2, 1949 at Mason City, IA to Delores (Webb) and Jack Coyle. She was adopted in 1955 following her mother’s marriage to Avery Mullin. She attended elementary school in Springview and then attended Keya Paha County High School, graduating in 1968. Following graduation, she went to fashion merchandising school at Parks School of Business in Denver, CO. She was united in marriage to Howard Nilson on June 21, 1969 in Ainsworth, NE. Two sons, Aaron and Wade were born to this union. Following their marriage, they resided in Burton, NE. In 1989, they moved to Lincoln, NE where Howard attended college and she worked in retail sales. In 1992, they moved to Rapid City where they resided until 2020, when they retired to Springview. She was a devoted wife, mother and grandmother. Family was most important in her life, who she cared for and loved deeply. She was an artist, as evidenced by her paintings and how her home and yard were decorated. She was avid about repurposing, arts and crafts. Dee was also a member of the Lutheran church. Dee was preceded in death by her father Avery Mullin and Jack Coyle and his wife, Frances; half-siblings Tom Coyle and Kate Coyle. She is survived by her husband Howard, two children, sons Aaron Nilson and wife Cody of Ainsworth and Wade Nilson and wife Wendy of Vermillion, SD; mother Delores Mullin of Springview; brother Alan Mullin and wife Susan of Indianapolis, IN; seven grandchildren, Cody (Kelsey), Shania, Jayce (Monte), Landon Nilson, Cole Sundquist, Ethan and Sophia Nilson; two great-grandchildren, Brix and Bricklee; half-siblings John Coyle, Mary Jo Baumann, Joe Coyle and Ann Determan, along with nieces, nephews, cousins, friends and neighbors. Tears and heartache are ours, but we rejoice that there was no long suffering and that she is with her savior Jesus Christ for eternity. “Eternal rest grant unto them, O Lord, and let perpetual light shine upon them. May the souls of all the faithful departed, through the mercy of God, rest in peace." Funeral Services were held on Tuesday, November 30, 2021 at the Grace Lutheran Church in Burton, Nebraska with Pastor Bill Serr officiating at the service. Music was provided by Sandra Heerten. The Vocal Selections of, “It Is Well With My Soul” was sung by Rick & Scotty Nelson, “On Eagle’s Wings” by Kayla Nilson and “Amazing Grace” & “I’ll Fly Away” by John Coyle. Interment followed at the Mt. Hope Cemetery in Springview, Nebraska. Casket Bearers were: Cody Nilson, Ethan Nilson, Chris Mullin, Cole Sundquist, Landon Nilson and Monte Martens. Memorials were suggested to the family for future designation.

Dee Anne Nilson, 72, of Springview, NE and formerly of Rapid City, SD passed away on November 23, 2021 at Rock County Hospital in Bassett, NE. Dee was born on July 2, 1949 at Mason City, IA to Delores (Webb) and Jack Coyle. She was adopted... View Obituary & Service Information

The family of Dee Anne Nilson created this Life Tributes page to make it easy to share your memories.

Dee Anne Nilson, 72, of Springview, NE and formerly of Rapid...