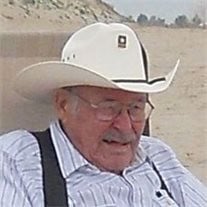 Dean P. Kloppel was born on July 17, 1926 to Otto and Rose (Starkjohann) Kloppel in Leigh, Nebraska and passed away on July 26, 2013 at Bryan LGH Medical Center East Hospital in Lincoln, Nebraska. Dean was a brother to four other brothers and three sisters. He attended grade school until the 8th grade. In 1987 on of Dean's proudest moments is when he received his diploma from Ainsworth High School. Dean enlisted into the Army on August 31, 1950 serving in the Korean War, and was discharged on August 19, 1952 as a Sergeant. He also served in the Nebraska National Guard from 1972 until 1990. He was a member of the American Legion Post #79, and served as a Post Commander in 1974. On June 26, 1955, Dean married Anita Lewis at the United Methodist Church in Ainsworth. To this union three children were born. After living on the west coast area for a short time, they returned to the Ainsworth area. He was a ranch hand, he worked at Masters Nite & Day/Lube Station, he was a truck driver, and also worked for the City of Ainsworth. Dean enjoyed his free time hunting and fishing. He was always ready to pick up and head to the river for some time at the cabin with his friends, Gary and Don. He looked forward to times with his family, grandchildren, and great-grandchildren. Getting together for holidays, family reunions, and having lunch at the Senior Center. Dean was a man of few words, but he was always ready to sit and visit, or watch a good western movie, Lawrence Welke, Big Joe Polka Show or read a magazine or book. Dean is preceded in death by his parents, Otto and Rose, wife, Anita, sister, Arlene Hollopeter, brothers, Kermit, Morris, Duane and Glen. He is survived by his three children, John (Paula) Kloppel of Columbus, Nebraska, Carrie (Doug) DeLancey of Lincoln and James (Marci) Kloppel of Staplehurst, Nebraska. Ten grandchildren, and four great-grandchildren. Sisters, Donna Nelson of Omaha, Nebraska and Bonnie Henne of Valentine, Nebraska, along with all of his nieces, nephews and special friend Karen and a multitude of friends. Funeral Services were held on July 31, 2013 at the Hoch Funeral Home in Ainsworth with Pastor Eldon Davis officiating over the service. Instrumental music was provided by Bob and Duane Keim, playing a medley of Dean's favorite selections as well as singing the song selection of "It's Not the Last Mile". Pallbearers were Joel Kloppel, Jordan Kloppel, Jacob Kloppel, Joshua Kloppel, Steven DeLancey, Sean DeLancey, Jarrod Jensen, Kevin Kloppel. Honorary bearers were granddaughters and great-grandchildren, Dustin Kloppel, Koby DeLancy, Elise Kloppel, Nyssa Kloppel, Traci Kloppel, Sarah Jensen and Chloee DeLancey. Burial was held at the Ainsworth Cemetery with Military Honors of taps and gun salute being presented by the Ainsworth American Legion Post #79. Deans' grandsons, Jordan Kloppel and Sean DeLancey representing the Nebraska and Colorado National Guard Units folded and presented the flag. Memorials were suggested to the Ainsworth Senior Center or to the Ainsworth American Legion Post #79.

Dean P. Kloppel was born on July 17, 1926 to Otto and Rose (Starkjohann) Kloppel in Leigh, Nebraska and passed away on July 26, 2013 at Bryan LGH Medical Center East Hospital in Lincoln, Nebraska. Dean was a brother to four other brothers and... View Obituary & Service Information

The family of Mr. Dean P. Kloppel created this Life Tributes page to make it easy to share your memories.