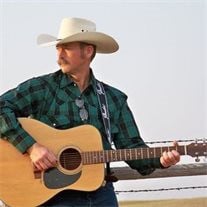 David George Carr was born September 10, 1962 at Ainsworth, Nebraska to Garth "Buck" and Doris (Rasmussen) Carr of Springview, Nebraska. He joined brothers Doug and Rick, and later a sister Kathy. David attended grade school at Liberty Dist. 17 and graduated from Keya Paha County High School in 1981. David was an avid hunter and fisherman. Breaking and training horses was his passion. He was also a Cowboy Poet and Singer/Songwriter who traveled and received several awards for his songs and prose. David purchased his mother's childhood home place and made his home there filling the pastures with his horses and cows. After a long battle with cancer, David passed away at his childhood home surrounded by family and his good friend on July 12, 2015. David is preceded in death by infant brother, Mark and sister, Kathy. He is survived by his parents, Buck and Doris Carr; brothers, Doug Carr of Springview and Rick (Ann) of Burton, Nebraska; nieces, Jennifer (Brooks) Smith of North Platte, Nebraska, Aimee (Lee) Schrader of Burton, and nephew, Thad (Amanda) Carr of Scottsbluff, Nebraska. Five great-nephews, three great-nieces, and a host of relatives and friends. Funeral services were held on July 16, 2015 at the United Methodist Church in Springview, Nebraska, with Pastor Rod Heilbrun officiating the service. Music was provided by Joe McBride singing the selections of, "God Must Be a Cowboy at Heart", "Riders in the Sky", and "Like a Cowboy". Pallbearers were, Thad Carr, Lee Schrader, Brooks Smith, Matt Stephen, Jim Ruther, and Frank Nachtman. Honorary bearers were, all of Dave's other family and friends. The processional to Mt. Hope Cemetery where the burial was held was by a horse drawn wagon led by Della Boyd and Gary Zimbelmann, and under the direction of Hoch Funeral Home of Ainsworth. In lieu of flowers, memorials were suggested to the family for a future designation.

The family of Mr. David G. "Dave" Carr created this Life Tributes page to make it easy to share your memories.