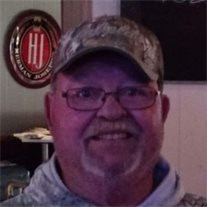 David Calvin Croghan was born a few minutes after his identical twin brother, Dale Lyle Croghan on November 1, 1954 to Calvin D. and Virginia A. (Dodds) Croghan in Ainsworth, Nebraska. David attended grade school in Long Pine, Nebraska and graduated in Bassett, Nebraska. He met Robin Tuttle on 1979 and they were blessed with one son, Jason David Croghan in 1981. David went to be with his Lord and Savior on November 15, 2017 in Kearney, Nebraska after a two-year battle with kidney disease. David was preceded in death by his parents, Calvin and Virginia; and his brother, Dale. He is survived by Robin Tuttle of Bassett; son, Jason and wife, Tandi and grandchildren, Camree and Keeton all of Rapid City, South Dakota; sister, Juli Brown and husband, Dale of Colome, South Dakota; along with nieces, nephews, cousins, and many dear friends. David loved his family. He enjoyed fishing, hunting and spending time with friends and he never met a stranger. If he liked you, he loved you. Funeral Services were held on Monday, November 20, 2017 at the United Methodist Church in Bassett, Nebraska with Pastor Michelle Byerly officiating at the service. The CD Selections of "Amazing Grace," "The Parting Glass" and "Go Rest High On That Mountain" were provided. The obituary and words of remembrance were given by Cody Croghan. Pallbearers were Cody Croghan, Heath Croghan, Tyler Croghan, Matt Croghan, Andy Croghan and Dale Brown. Honorary Casketbearers were: Ernie Beguin, Greg Haszard, Wayne Mattern, Kent Croghan, John Stahl, Mike Croghan and Bob Walton. Burial followed in the Bassett Memorial Park Cemetery under the direction of Hoch Funeral Home of Bassett. In lieu of flowers, memorials were suggested to the family for a future designation.

The family of Mr. David C. Croghan created this Life Tributes page to make it easy to share your memories.

David Calvin Croghan was born a few minutes after his identical...