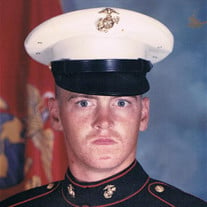 Darby Randall Cook Sr. was born in Ord, Nebraska to Dennis R. Cook and Susan E. (Ford) Cook on December 4, 1970. He joined his older brother Dennis R. (Rod) on the ranch in Taylor, Nebraska where they lived until 1973. The family then moved to Johnstown, Nebraska. A sister, Elizabeth joined the family in 1975. The boys loved to tease their little sister. Darby attended Johnstown Public School from Kindergarten through eighth grade. He attended high school in Ainsworth, Nebraska and graduated in 1989. He missed his graduation because he had chickenpox. Darby enlisted in the Marine Corps right after graduation, serving from August 1989 to July 1993. He served in the Desert Storm Campaign and received two meritorious Service Awards while serving in Iraq. He married Ann Weller and three children were born to that union: Cheyenne A. (Cody) Doyle, Skyler Montana Cook and Darby Randall Cook Jr. Darby later married Christine Arent and had two children: Jessamyne L Cook and Decker R. Cook. Christine and the children live in Anchorage, Alaska. Darby worked in construction for many years. Always a climber, he worked for a time for a cell tower construction company. Darby loved construction and always took pride in his work. He is preceded in death by his brother; Rod and his beloved Uncle Charlie Strelow of Bassett, Nebraska. He leaves to mourn; his children, Cheyenne, Skyler, Darby Jr., Jessamyne and Decker; his father, Dennis Cook of Ainsworth; his mother, Susan Cook of Plattsmouth, Nebraska; sister, Elizabeth (Tony) Hemmer and their children Ember and Carsyn of Plattsmouth; many friends and a large extended family. Darby loved his children and enjoyed his time spent with them. He will be missed by all. Graveside Memorial Services were held on Friday, May 21, 2021 at the East Woodlawn Cemetery in Johnstown with Pastor Dennis Quigley officiating at the service. Military Honors were conducted by Ainsworth American Legion Post #79. Memorials were suggested to the family in Darby’s name for future designation. Hoch Funeral Home of Ainsworth was entrusted with the service arrangements. Online Condolences may be left for the family at www.hochfuneralhome.com.

Darby Randall Cook Sr. was born in Ord, Nebraska to Dennis R. Cook and Susan E. (Ford) Cook on December 4, 1970. He joined his older brother Dennis R. (Rod) on the ranch in Taylor, Nebraska where they lived until 1973. The family then moved... View Obituary & Service Information

The family of Darby Randall Cook Sr. created this Life Tributes page to make it easy to share your memories.