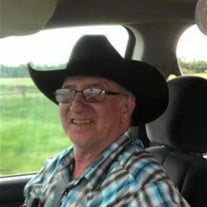 Daniel Bruce Wooters was born to Guy H. and Bertha J. (Van Ostrand) Wooters on January 3, 1956 at Broken Bow, Nebraska. He passed away into Gods hands on January 1, 2019, at Ainsworth, Nebraska. Dan was a funny guy, a jokester, and was always willing to help friends with their horses, (even when he didn’t feel good.) Dan would have “given his shirt off of his back” to someone if they needed it. He loved his horses, and most of all his family. Dan married Dawn Marie McCurdy on July 15, 1978, at Wood Lake, Nebraska. They had three children; Angela Rene, Jennifer Dawn and Bo Daniel. Dan is preceded in death and welcomed home by his parents, Guy and Bertha, and sister, Mary. He is survived by his wife, Dawn of Ainsworth, his daughters, Angela Haskell and son-in-law, Scott Haskell of Ainsworth, Jennifer Kettleborough and son-in-law, Casey of Council Grove, Kansas; son, Bo Daniel and wife Jessica of Callaway, Nebraska. Brother, Tim “Tex” Wooters and wife Ellie of Callaway; Sisters, Monetha Spellbrink and husband Larry of Grand Island, Nebraska, and Gaylene Bennett and husband Wayne of Fullerton, Nebraska. Dan’s amazing seven grandchildren, Tylure Bottorff, Jake Caspar, Blaine Brandon, Becca and Lance Wooters, and Sadie and Patricia, along with nieces, nephews, and other family members. Memorial Services were held on Saturday, January 5, 2019 at the Evangelical Free Church in Ainsworth. Pastor Scotty Clark officiated the service. Special CD selections of “Daddy’s Hands” by Holly Dunn, and “The Cowboy Rides Away” by George Strait were provided. A private family graveside memorial service will be held at a later date at the Broken Bow Township Cemetery at Broken Bow, Nebraska. Memorials have been suggested to the family in Dan’s name for future designation and may be sent to: Dawn Wooters 87857 430th Ave. Ainsworth, NE. 69210. Hoch Funeral Home of Ainsworth assisted with the arrangements. To leave an online condolence visit www.hochfuneralhome.com

Daniel Bruce Wooters was born to Guy H. and Bertha J. (Van Ostrand) Wooters on January 3, 1956 at Broken Bow, Nebraska. He passed away into Gods hands on January 1, 2019, at Ainsworth, Nebraska. Dan was a funny guy, a jokester, and was always... View Obituary & Service Information

The family of Mr. Daniel B. Wooters created this Life Tributes page to make it easy to share your memories.