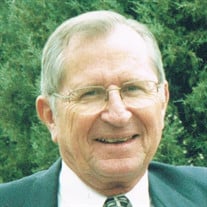 Daniel G. Kozisek, 88, of Ainsworth, passed away on Wednesday, April 22, 2020, at the Brown County Hospital. He was born on June 19, 1931, to William and Lillian (Semin) Kozisek, on a farm near Surprise, Nebraska. Dan graduated from Marietta High School and attended Wayne State College. He was married to Pauline Birkel on February 25, 1952. In 1960, Dan and Pauline, along with their children, Colleen, Mark, and Greg, moved to Ainsworth where he owned and operated Ainsworth Motors for more than 30 years. Dan’s marriage was central to his life. Together, he shared a 61-year marriage with Pauline. The two traveled extensively, visiting 44 states and 16 foreign countries, all while wintering in Florida for the last 30 years of their time together. Outside of his family, he was most proud of his community involvement. Dan’s faith guided his life. His civic involvement and desire to improve the lives of people who lived in Ainsworth stemmed from that faith. He, with others, sought to improve the services provided to the people of Ainsworth by promoting, raising funds and contributing to projects such as the building of St. Pius X Catholic Church, the original doctor’s clinic, the Brown County Hospital and Cottonwood Villa. Dan is preceded in death by his wife, Pauline; parents, William and Lillian; brother, Art; and sister, Carol. He leaves to mourn his passing his daughter, Colleen (John) Viola, of Fort Worth, Texas, grandchildren, Ryan (Maria) and Paul and great grandchildren Daniel, Mason, Nolan and Harlan Viola (who all knew him as “G-G-Pa”); son, Mark (Joni) Kozisek, of Ainsworth, and grandchildren, Tye, Drew, Claire, and Conner; son, Greg (Sue) Kozisek of Lincoln, and grandchildren, Matthew (Jenn) and Kellin, and great grandchildren Cameron, Wesley and Ella; brothers, Bill (JoAnn) Kozisek and Larry (Jan) Kozisek; sister, Mariann Kozisek; many other family members; and a host of friends. A private graveside service will be followed with a memorial Mass to be held at a date to be determined later. Memorials are suggested to St. Pius X Catholic Church, of which he was an active member for over 60 years, or the Ainsworth Public Library, from which he derived hours of enjoyment reading and discussing books. This man of charm, wit, humor and compassion will be greatly missed.

Daniel G. Kozisek, 88, of Ainsworth, passed away on Wednesday, April 22, 2020, at the Brown County Hospital. He was born on June 19, 1931, to William and Lillian (Semin) Kozisek, on a farm near Surprise, Nebraska. Dan graduated from Marietta... View Obituary & Service Information

The family of Daniel G. Kozisek created this Life Tributes page to make it easy to share your memories.

Daniel G. Kozisek, 88, of Ainsworth, passed away on Wednesday,...