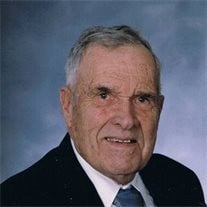 Dale Edward North, 95, of Long Pine, Nebraska passed away Saturday April 30th, 2016 at the Good Samaritan Society in Atkinson, Nebraska. Dale was born to Robert C. and Bessie L. (Pearson) North at Plainview, Nebraska on July 12, 1920, the fourth of five children. He was raised in the Plainview area and graduated from high school there in 1940. Following graduation, at the beginning of World War II, he worked in California at an aircraft factory until he was drafted into the service in December 1943. He chose to serve in the Army Air Corp. His basic training was in Biloxi, Mississippi and then he received further training at aerial gunnery school in Las Vegas, Nevada. He was deployed and stationed at Sudbury, England in early 1945. He served as a waist gunner on a B-17 bomber completing 23 missions over Germany and France before the war ended. He was promoted to sergeant and was honorably discharged in December 1945. After returning from England Dale farmed in the Plainview area for several years and was married to Vera M. Ritter in 1951. To this union a son, Edward Lee, was born in October 1953. Dale and the family moved to the Ainsworth area in 1954 where he ranched and worked at the House Chevrolet dealership in the autobody department until Vera passed away in April of 1959. Following Vera's death Dale and Ed moved to Valentine where he worked for Clements Furniture Company in their appliance department. They then moved back to Ainsworth where Dale purchased and operated a shoe repair shop. Dale married Ethel A. Nelson on Oct. 22nd, 1962 in Ord, Nebraska. They lived in the Springview area ranching and cutting posts until 1966 when they moved to Long Pine, Nebraska. Dale worked for the Ainsworth Irrigation District as a ditch rider and on the maintenance crew until he retired in January 1983. He had a very inventive mind and manufactured many items including a replica of a steam engine, a working homemade tractor with loader and many toys for his grandchildren. He enjoyed traveling, camping, hunting, canoeing, tinkering with his projects and spending time with his grandchildren and great grandchildren. He accepted the true gospel in 1959 and it remained his chief joy until his passing. He was preceded in death by his parents, his first wife Vera, two brothers and two sisters. He is survived by his wife Ethel, son Ed North and wife Shari of O'Neill, Nebraska; three grandchildren Bryan North and wife Jamie of Holbrook, Nebraska; Sarah(North) Hardin and husband Shelby of Mullen, Nebraska; Randy North and wife Tara of O'Neill, Nebraska; Great grandchildren, Joslyn, Adrienne, Tanner and Clayton North and Ethan and Brandon Hardin. Funeral Services were held at Hoch Funeral Home in Ainsworth, Nebraska. Stanley Morrison and Jon Platte served as officiants for the service. Music was provided by Sharon Mulford. Music selections of "With The Lord," "Sweet Sweet Release," and "We Love The Perfect Way" were provided by Calvin and Jacque Chipperfield. A poem was read by Dales' youngest great-grandson, Brandon Hardin, and "Dedication to Grampa" was written by grandson, Bryan North, and read by Janet Albrecht. Pallbearers were Bryan North, Randy North, Shelby Hardin, Delton Grotz, Mike Albrecht and Willis Williams. Honorary bearers were Sarah Hardin, Joslyn North, Adrienne North, Tanner North, Clayton North, Ethan Hardin and Brandon Hardin. Burial with Military Honors were provided by the VFW and American Legion Members at the Grandview Cemetery in Long Pine.

The family of Mr. Dale E. North created this Life Tributes page to make it easy to share your memories.