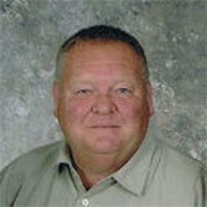 Dale Eugene Mundorf, age 70, was born in Ainsworth, Nebraska on March 12, 1946 to James D. and Lorena M. (Fernau) Mundorf. As a young child his family lived in various places. They finally settled in Long Pine where he graduated from Long Pine High School in 1964. Dale attended Chadron State College for 1 ½ years. He left college for a while and during this time he worked on a ranch. Later he took a job with Missouri Valley Construction. On June 3, 1966, Dale and Donna Lee Luehrs were married in Long Pine. Their honeymoon was spent camping at Smith Lake in Nebraska. This began their love of camping and fishing. The tradition of camping each year on their wedding anniversary was rarely missed for the next 50 years. Dale and Donna were blessed with the birth of a baby girl, Pamela Sue. Dale was employed by Westoff Construction but this took him away from his family when they moved the business to Kansas. He did not like being away from his family so he took a job with the Ainsworth Star Journal owned by Fred Rose. Dale did enjoy this line of work, but he had a strong desire to finish college. He and his family moved to Chadron where he earned his Bachelor of Arts in 1972. Later he earned a Bachelor of Science degree. Dale's career in education began at Brown County District 76 in southern Brown County. This is where he realized his love for teaching. The next six years were spent teaching in Wood Lake. He truly loved the years he taught there. He carried many wonderful memories of times teaching in Wood Lake. He had the opportunity to teach in Ainsworth. The next 32 years he taught Math and Science to students ranging from 5th through 8th grades. Dale took great pride in the hard work his students put forth in the developing of a nature/hiking trail at the Long Pine State Park. This project was a continuing effort over several years and it involved developing community and financial support, and actual structural improvements. Completion of this trail led to many learning opportunities for the students in Science, Math, Social Studies and Art. Dale was invited to Washington D.C. where he was presented an award from the United States Department of the Interior for the work of the students at the hiking/nature trail. During his years of teaching, he was involved in all aspects of coaching at all age levels. Dale coached girls and boy's track, football, and girl's and boys' basketball. In 1980 while he was the assistant coach for high school boys' basketball, the team went to state. Dale enjoyed hearing from his former students and he kept track of their accomplishments after school. It meant so much to him when one of them would stop to visit or send a note. Dale's family always said he should have been a farmer. He absolutely loved to plant and grow things. He always grew a garden large enough that he could share with neighbors and friends. It was not uncommon for him to drive through town or the state park and give away his excess produce. Grandson Aiden "helped" him expand his "business" by accepting the position of "assistant manager" at a local farmers market. More recently he became known for his much requested Salsa! Summer days would find him on a lake in pursuit of his next master angler. He spent hours planning the location and specifics of his next fishing trip. He could create enthusiasm in those unfamiliar with the sport of fishing. Preceding him in death was his father, James D. Mundorf, his mother, Lorena Mae (Fernau) Barta, and brother, Delbert Mundorf, niece, Debbie (Mundorf) Osburn and niece, Jean Marie (Maurer) Shankland. Left to mourn his passing is his wife of 50 years, Donna, daughter Pamela (Steve) Huber, and Grandson Aiden Dale Mundorf all of Norfolk, Nebraska; sister, Marcella "Mouse" Maurer, Bassett, Nebraska; brother, Dwayne "Wink" (Patsy) Mundorf of Omaha, Nebraska; mother-in-law, Ruth Luehrs, Long Pine; sisters-in-law, Elsie Mundorf of Wood Lake, Nebraska, LaVonne (Dail) Vetter, Cozad, Nebraska, Joyce (Gary) Hutcheson, Long Pine, and Dixie (Lee) Hansen, Douglas, Wyoming plus many nieces, nephews, cousins and aunt. Memorial Services were held at the Hoch Funeral Home on January 7, 2016 with Chip Morter officiating the service. CD selections of "You Raised Me Up" by Josh Groban, and "You Should Be Here" by Cole Swindell. Honorary bearers were Todd Vetter, Jacob Vetter, Luke Hutcheson, Matthew Porter, Roy Hansen, Jake E. Maurer, and Dan Mundorf. Inurnment followed at the Grandview Cemetery in Long Pine. In lieu of flowers, memorials were suggested to the Autism Society of Nebraska, whose mission is to improve the lives of all affected by autism.

Dale Eugene Mundorf, age 70, was born in Ainsworth, Nebraska on March 12, 1946 to James D. and Lorena M. (Fernau) Mundorf. As a young child his family lived in various places. They finally settled in Long Pine where he graduated from Long... View Obituary & Service Information

The family of Mr. Dale E. Mundorf created this Life Tributes page to make it easy to share your memories.