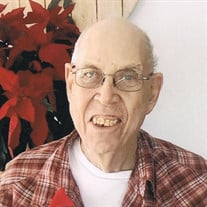 Dale E. Billings was born on June 26, 1936 near Norden, NE to Jay Loy Billings and Myrtle Mary (Reynolds) Billings. He attended grade school in Keya Paha county and graduated from Keya Paha County High School in Springview, NE. Dale lived on his parents’ place. He did live in Ainsworth, NE for a few years and then moved to Bassett, NE. Dale worked at the sale barn in Bassett for a number of years. He was a member of the Bassett Assembly of God Church and was very active in the Rock County Senior Center. He lived in Bassett until he moved into the Sandhills Care Center in Ainsworth, where he passed away on Monday, April 11, 2022 at the age of 85 years. Dale was preceded in death by his parents; son, Jeff Loy Billings; brother, Virgil Billings and sister-in-law, Catherine Billings; a brother-in-law, John Foster and one nephew, Sam Foster. Dale is survived by son, Michael Billings of Valentine, NE; a sister, Verna Foster of Hay Springs, NE; three nieces, Louise (Andy) Keogh of Springview, Connie Garner of Oxford, NE, Donna (Conrad) Bostron of Gering, NE along with numerous of family members. A Graveside Service was held on Friday, April 15, 2022 in the Mt. Hope Cemetery at Springview. Pastor Brent Graves officiated at the services. Casketbearers were family and friends of Dale. Memorials were suggested to the family in Dale’s name. Hoch Funeral Home of Ainsworth is in charge of arrangements. Online condolences may be left for the family at www.hochfuneralhome.com.

The family of Dale E. Billings created this Life Tributes page to make it easy to share your memories.