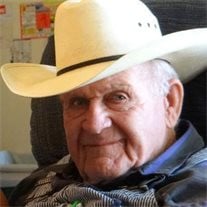 Paul D. Smith was born on March 17, 1929 in Plainview, Nebraska to Harley (H.O.) and Esther (Ellis) Smith and passed away on September 23rd, 2014 at the Good Samaritan Hospital in Kearney, Nebraska at the age of 85. Paul's school years (from 1st grade through 12th grade) were spent in McLean, Nebraska. He served in the National Guard with Co. "F" 134th Infantry at Norfolk, Nebraska from 1948-1951. Paul met his lifetime sweetheart, Ruth Galvin, becoming best friends at the age of 6. Over the years, they enjoyed riding Paul's pony Ribbon, sledding on Main Street, playing softball with the other town kids in the schoolyard, roller skating, and free movies on Tuesday nights. They were married on February 19th, 1950 at the McLean Methodist Church where they both attended regularly in their growing up years. Paul and Ruth were blessed with three children, David, DeLila, and Connie. From a very early age Paul desired to make a living in farming and ranching. For several years, he joined the wheat harvest in Kansas and followed it into the Dakotas. Following graduation from high school in McLean, Paul rented his first farm southwest of McLean. A few years later he purchased his own farm southeast of Osmond, Nebraska where he worked the land with his team, Barney and Daize. In 1965, he fulfilled another dream- trading the farm for a ranch on the Calamus River in the Sandhills of south Brown County, where he enjoyed two lifelong loves-his family and his cattle. Paul became well acquainted with many folks in Brown County and surrounding areas while hauling livestock and ear corn with his truck. Often times Ruth would pack a lunch and ride along with Paul. He missed riding a horse, and when it came time he could no longer ride, he joked that "the 4-wheeler was easier to catch." His favorite pastime in recent years was checking and feeding his cattle on his 4-wheeler with his dog Sam, running closely alongside. Paul's pride and joy were his kids, grandkids, and great grandchildren. He enjoyed attending as many of their events as possible from grade school programs, to high school wrestling meets, to graduations, to college rodeos. Paul was Ruth's rock through the ups and downs of life, and he was always doting on her. He was respected by friends, and when it came to business dealings, his handshake was as good as gold. Paul will always be remembered for his kind words and bright smile (which he always greeted everyone with.) Paul was preceded in death by his parents, Harley and Esther. Left to mourn his passing are his wife Ruth, of 64 1/2 years; brother, Wendall and wife LeVila of Muscoda, Wisconsin; children, David and wife Sharon of Rapid City, South Dakota, DeLila Lumbardy and husband Stan of Recluse, Wyoming, and Connie Rossenbach and husband John of Ainsworth, along with ten grandchildren and numerous great-grandchildren who cherish many, many wonderful memories of a wonderful, thoughtful man that enriched every life he touched. Funeral Services were held on September 29, 2014 at the United Methodist Church in Ainsworth Nebraska. Pastor Eldon Davis officiated over the service. Music was provided by Sherry Campbell and Joe McBride with special musical selections of "In the Garden" and "Shall We Gather at the River." "God Be with You Til We Meet Again" was also sang as a congregational selection. Pallbearers were Kevin Rossenbach, Taylor Rossenbach, Wilbur Juett, David Smith, Jake Morris, Daniel Chrisp, Caleb Chrisp, Brian Chrisp and Thomas Smith. Burial was held at the Ainsworth Cemetery under the direction of Hoch Funeral Home of Ainsworth. Memorials were directed to the family for a future designation.

Paul D. Smith was born on March 17, 1929 in Plainview, Nebraska to Harley (H.O.) and Esther (Ellis) Smith and passed away on September 23rd, 2014 at the Good Samaritan Hospital in Kearney, Nebraska at the age of 85. Paul's school years (from... View Obituary & Service Information

The family of Mr. Paul D. Smith created this Life Tributes page to make it easy to share your memories.