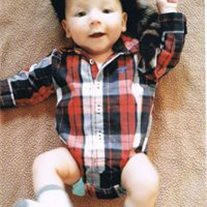 Cooper Simon Stewart was born on July 21, 2016 at Avera St. Anthony's Hospital in O'Neill, Nebraska to Lucas and Melissa (Heine) Stewart of Long Pine, Nebraska. He was baptized into God's loving family on October 23, 2016 at St. Peter Lutheran Church in Bassett, Nebraska. Cooper was called to his heavenly Father on December 17, 2016, just shy of 5 months of age at Avera McKennan Hospital in Sioux Falls, South Dakota. From the beginning, Cooper made it easy on his parents sleeping in his crib all night and never making a fuss. He was a jabber box for such a young age and would tell you stories for hours. His bright blue eyes and smile that stretched from ear to ear would light up every room and his laugh would put a smile on anyone's face. He loved playing peek-a-boo and the more you scared him the louder and bigger his laugh got. Cooper was just learning to roll over but would get stuck with his hands underneath him. With a little help he would be happy again as he explored his new achievement. Cooper enjoyed the family ranch and farm. He oversaw the cattle work and cooed at the cattle to keep them in line. Cooper also enjoyed seeing the dogs, cattle, chickens, and kittens at the farm. Cooper is deeply loved by his dad and mom, Lucas and Melissa Stewart; his grandparents, Dale and Janet Stewart and Virgil and Kathleen Heine; his great-grandparents, Lucille Heine and Duane Green; his aunts and uncles, cousins, and other family members, and all the friends he has made. Even though you are gone from us now, you will be forever in our hearts. Funeral Services were held at the St. Peter Lutheran Church in Bassett. Pastor John Brink officiated at the service. Music was provided by Evelyn Armstrong. Honorary Bearers were Ryan Stewart, Justin and Christina Dose, Brandon and Tiffany Suhr and Andrew Heine. Burial followed at the Willowdale Cemetery near Newport, Nebraska. Hoch Funeral Home of Bassett assisted with the arrangements. In lieu of flowers, memorials were suggested to the family in Cooper's name.

The family of Cooper Simon Stewart created this Life Tributes page to make it easy to share your memories.