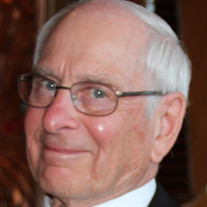 Conrad Budde, Jr., was born and raised in Ainsworth, Nebraska; he died at the Brown County Hospital in Ainsworth, Nebraska on January 7, 2020. He married LaRena Mae Mitchell of Bassett, Nebraska in December of 1950. The couple started a family and resided in Ainsworth until 1970, at which time they moved to Loveland, Colorado. At retirement the couple moved back to Ainsworth. As a young man "Junior" joined his father in the building business. There are many homes and businesses lining the streets of Ainsworth that can be attributed to their work. In Colorado, he had a long successful career in the building industry and was an accomplished entrepreneur. He played an active role in the Ainsworth community, serving as Mayor and City Councilman in the 1960’s. Later he served on the city council in Loveland, Colorado and was a board member of Platte River Power Authority. Conrad always had time for his family and spent many a time spinning colorful tales in the language of his childhood, delighting his children and grandchildren. He always had an interest in their lives and wanted them to succeed. He pitched in any way he could to help and for that they will be eternally thankful. He was preceded in death by his wife LaRena Mitchell Budde, mother, Ella Anna Schlueter, his father, Conrad Hibbo Budde, a sister Evelyn M. Churchill Collingwood, and a grandson, Conrad R. Budde. Survivors include his children, Michael L. Budde (Debbie) of Forest, Virginia, Ann A. Lebsack (Gary), of Conway, South Carolina, and John B. Budde (Sandy) of Severance, Colorado along with five grandchildren, ten great grandchildren and his sister Helen B. Boysen, Grand Island, Nebraska. A joint memorial services with his beloved wife, LaRena was held at the Zion Lutheran Church on Saturday June 20, 2020 with Pastor Georg Williams officiating the service. Inurnment followed in the Lutheran Cemetery northwest of Ainsworth.

The family of Conrad Budde Jr. created this Life Tributes page to make it easy to share your memories.

Conrad Budde, Jr., was born and raised in Ainsworth, Nebraska;...