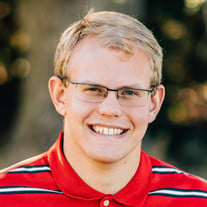 Conner Michael Jackman was born on February 27,, 2002 in Valentine, Nebraska to Aaron and Maureen (Harty) Jackman. He passed away on January 1, 2022 in Ainsworth, Nebraska. Conner was baptized and later confirmed into the Lutheran Faith. Conner was very active and enjoyed many sports during his school years. He excelled at wrestling and went to State his junior year of high school. He graduated from Ainsworth High School in July of 2020. Conner completed his COE program at AKRS Equipment, and was working there at the time of his death. He started at Southeast Community College in the John Deere Tech Program in Milford, Nebraska after graduation. Conner had just received the Student Impact Award from the college, as voted on by his peers and instructors. Conner loved cars, pickups, and mechanics. He had a passion for weightlifting and competed in several lifting events. He will be remembered as a sensitive, tenderhearted soul despite his size and “Beast Mode” on the football field and wrestling mat. He loved his family and friends, so dearly and was the first to give a big hug. Conner is survived by his father, Aaron Jackman of Johnstown, Nebraska; his mother, Maureen Jackman of Ainsworth; his brothers, Kyle and Aiden, both of Ainsworth. Paternal grandparents, Jimmy and Connie Jackman of Johnstown; maternal grandmother, Maxine Harty of Deer River, Minnesota; aunts, Alana Jackman and husband Frank Webb of Hubbard, Texas; Brittanie and husband Todd Pinneo; cousins, Ava and Alex Larmon of Rising City, Nebraska; his uncle, Dr. John Harty of Lawrence, Kansas; Godparents, Emily Schulz and Michael Wheeler, both of Rapid City, South Dakota, along with numerous other relatives and friends. Conner was preceded in death by his maternal grandfather, John “Jack” Harty. Funeral Services were held on Friday, January 7, 2021 at the Zion Lutheran Church in Ainsworth, Nebraska with Pastor Bill Serr officiating at the service. The CD Selection of “On Eagles Wings”, “Jealous Of The Angels” and Amazing Grace (My Chains Are Gone) were played. Special remarks were given by Conner’s aunt, Brittanie Pinneo. Interment followed at the Lutheran Cemetery in Ainsworth, Nebraska. Casket Bearers were: Kyle Jackman, Aiden Jackman, Oren Pozehl, Sloan Raymond, Roudy Clapper and Jacob Wojcik. Honorary Casket Bearers were: The members of the AHS Class of 2020 and the John Deere Tech Program Class of 2022. Memorials were suggested to a memorial fund created in Conner’s name for improvements to the Ainsworth High School Weight Room. Hoch Funeral Home of Ainsworth was entrusted with the service arrangements. Online Condolences may be left for the family at www.hochfuneralhome.com.

Conner Michael Jackman was born on February 27,, 2002 in Valentine, Nebraska to Aaron and Maureen (Harty) Jackman. He passed away on January 1, 2022 in Ainsworth, Nebraska. Conner was baptized and later confirmed into the Lutheran Faith. Conner... View Obituary & Service Information

The family of Conner Michael Jackman created this Life Tributes page to make it easy to share your memories.