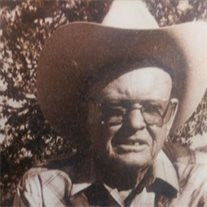 Clyde Edward Blake was born to Edward and Gladys (Robinson) Blake, on December 17, 1926 on the ranch he still owns southeast of Bassett Nebraska in southern Rock County, and passed away on June 1, 2016 at the Rock County Hospital in Bassett at the age of 89 years. He was the fourth of six children. He received his education at a country school close to the Blake Ranch. Clyde was united in marriage to Darline Minshall on December 9, 1950, at the Brown County Courthouse in Ainsworth Nebraska. To this union were born six daughters, Connie Lee-1951, Linda Lou-1952, Sharon Faye-1954, Deborah June-1955, Vickie Lynn-1958 and Yvonne "Corkie" Kay-1959. Clyde lived his entire life in Rock County as a Nebraska Sandhills rancher. Under his stewardship the Blake Ranch was awarded the KBR SWCD Conservation Award in 1964 and the Upper Elkhorn NRD Conservation Award in 1991. He was a member of the Nebraska Stockgrowers Association, serving on the board of directors. Clyde had an avid interest in veterinary medicine often performing surgery on his livestock with his daughters assisting. He was instrumental in bringing A.I.ing into the Sandhills area improving cattle genetics on many ranches. He was an A.I. Instructor and an ABS District Representative for many years, improving the bloodlines of his Hereford cattle through keeping replacement heifers, A.I.ing and purchasing quality bulls from Sandhills ranches. In 1988 the Clyde Blake Ranch was a featured stop on the Nebraska Hereford Tour. Flying was another of Clyde's passions. In 1948 he received his private pilots' license. Following the blizzard of 1949 he flew groceries, supplies and mail to stranded ranch families. Clyde loved to fly, often flying his daughters to the Sybrant District 77 one room elementary school where he served as a school board officer for several years. Later in life, Clyde served two terms as a Rock County Commissioner. Clyde was a devoted son, husband, father, and grandfather, dedicating his life to his family, the ranch, and his friends. He was preceded in death by his parents, two daughters, Deborah Blake and Sharon (Blake) Croghan, four brothers Iven, Wallace, Irven, and Archie Blake, and son-in-law Roger Hollenbeck. He is survived by his wife, Darline of 65 years, four daughters, Connie Hollenbeck of Mullen Nebraska, Linda (Ray) Maas of Plattsburg Missouri, Vickie (Paul) Walz of Valentine Nebraska and Corkie (Tony) Fox of Bassett; son-in-law, Kent Croghan of Bassett; sister, Faye (Harry) Buoy of Bassett; 13 grandchildren and 22 great- grandchildren. Funeral Services were held on June 7, 2016, at Hoch Funeral Home in Ainsworth with Donnie Painter officiating the service. "The Dance" was provided by Krisitie Keller and a Vocal Medley was provided by Krisitie Keller & Judith Lemp. CD selections of "My Own Kind of Hat" by Alan Jackson and "The Cowboy Rides Away" by George Strait were also provided. The Eulogy was delivered by Homer Buell. Pallbearers were Chad Hollenbeck, Kyndra Hollenbeck, Justin Anderson, Travis Anderson, Cody Croghan, Heath Croghan, Trent Walz, Brandi Tolle, Blake "BJ" Fox, Amber Chmelik, Kirby Fox, Lanny Walz, and Cole Fox. Honorary bearers were Dale Caskey, Jim Boettcher, Richard Lackaff, Ray Herrington, Dean Obermire, Ken Smith, Joe Andrews, Rich Kinney, and Connie Murphy. Burial followed at the Bassett Memorial Park Cemetery. In lieu of flowers, memorials were suggested to the family in his name.

Clyde Edward Blake was born to Edward and Gladys (Robinson) Blake, on December 17, 1926 on the ranch he still owns southeast of Bassett Nebraska in southern Rock County, and passed away on June 1, 2016 at the Rock County Hospital in Bassett... View Obituary & Service Information

The family of Mr. Clyde E. Blake created this Life Tributes page to make it easy to share your memories.