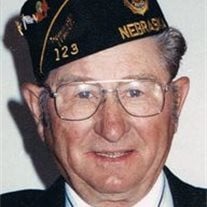 Clint Norman Davis was born on a farm near Norden, Nebraska on February 11, 1918 in a log house. He passed away on October 6, 2014 at the Rock County Long Term Care in Bassett, Nebraska at the age of 96 years. In May of 1936, he was united in marriage to Miriam Louise Byington. To this union three children were born: Joy Dawn, Judy Storm and K. Morris. Clint was very active in the community of Rock County, where he and his wife Miriam resided their entire 78 years of marriage. Clint served as Chaplain for the American Legion Club for 63 years. He was also on the school board, the hospital board, the historical society and the cemetery board. Clint was a longstanding member of the Lions Club, the Odd Fellows, the Methodist Church, and served as a volunteer fireman. As a Boy Scout Leader, under his guidance, Duane Garwood and Ed Hall became Eagle Scouts. He also served as president of the Nebraska Treasurer's Association. Clint is survived by his children Joy and Lynn Zumbrunn of Hesperia, California, and Judy and Jack Johnson of Bennet, Nebraska; eight grandchildren, their husbands and wives, 20 great-grandchildren, and 13 great-great-grandchildren, four nieces, and four nephews, his sister-in-law Donna DeWeese, and brother-in-law Gary Byington. Clint was preceded in death by his wife, Miriam Davis, his son, K.M. Davis, daughter-in-law, Joyce Davis, parents, Morris and Agnes Davis; sister, Rose Foster and brothers-in-law, Clem Foster, Max DeWeese and Donald Byington, and a sister-in-law, Eunice Crotty. Funeral Services were held on Saturday, October 11, 2014 at the Bassett United Methodist Church with Pastor Rod Heilbrun officiating. Music was provided by JoAnn Swanson along with special music selections of "It's Not the First Mile" and "Far Side Banks of Jordan" provided by Bob and Duane Keim. A CD selection of "It's A Wonderful World" by Louis Armstrong was also played. Casket bearers were David Zumbrunn, Greg Zumbrunn, Timothy Johnson, Matthew Johnson, Robert Pokorny, and Bob Rutherford. Honorary Casket bearers were: Dick Mauch, Tom Galleher, Bill Vodehnal, Ed Brown, Wes Sandall and Ernie Hasch. Burial with Military Honors by Bassett American Legion Post #123 was held at the Bassett Memorial Park Cemetery under the direction of Hoch Funeral Homes of Bassett. Memorials were suggested to the Bassett Volunteer Fire Department, the Rock County Senior Center, the Bassett American Legion Post #123 or to the Bassett United Methodist Church. Online condolences may be left for the family at: www.hochfuneralhome.com.

Clint Norman Davis was born on a farm near Norden, Nebraska on February 11, 1918 in a log house. He passed away on October 6, 2014 at the Rock County Long Term Care in Bassett, Nebraska at the age of 96 years. In May of 1936, he was united... View Obituary & Service Information

The family of Mr. Clint N. Davis created this Life Tributes page to make it easy to share your memories.

Clint Norman Davis was born on a farm near Norden, Nebraska on...