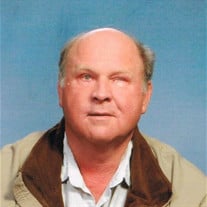 Clifford Talmadge Harris, 65 years of age, was born on January 17, 1956 in Wichita, Kansas. He spent his youth in the town of Ainsworth, Nebraska and enjoyed everything the Sandhills had to offer a young man. Cliff passed away peacefully in Norfolk, Nebraska on April 16, 2021 at 5:58 am with his two children by his side. Cliff sacrificed much of his life to provide for and develop what gave him extreme pride: his two accomplished children. His son, Stephen Paul Harris, is a Chief Hospital Corpsman of the US Navy and his daughter, Leah Marie Harris-Anderson, is a Doctor of Veterinary Medicine – no father could be prouder than Cliff. Because of Cliff’s direction, insight, and love, his children have been able to carry on his traits of being hardworking, compassionate, reliable, and fair. Cliff’s joy could be found in his two generously sweet and very skilled certified service dogs: Larrabee who is retired from guide service and Nate who, at the time of Cliff’s death, was his active seeing-eye guide. Cliff is also survived by his grandsons Ethan Hugh Harris and Leland Paul Harris, older sister Sheila Harris, younger sister Tamara Omer, and his “adoptive” siblings Patricia Jones and David Kackmeister. He is preceded in death by his father Hugh Harris, mother Nadine Harris, and older brother James Harris. Cliff enlisted in the Navy in 1976 and honorably served our country as an Aviation Boatswain’s Mate. It would be hard to find a sailor in any period of our nation’s history that shared the same energetic enthusiasm to work and lead as ABE1 Harris. Despite being medically retired from naval service in 1983, Cliff’s pride in being a member of the world’s finest Navy never weakened. After Cliff’s military service, he began his career with the US Postal Service in San Diego, California. By the time he retired in 2005, he had advanced his way up to being Plant Manager of Norfolk’s US Postal Plant. Cliff’s leadership and work ethic led to the Norfolk plant receiving awards for being the most productive postal plant of its size in the region. Cliff thoroughly enjoyed being an avid outdoorsman, finding every opportunity to fish or hunt. His vision started to slowly decline in 1995, but he always found time to have outdoor adventures with family and friends. When Cliff wasn’t harvesting the meat for his meal, you could find him working in his yard and vegetable garden. As a self-proclaimed Michelin Star-quality chef, he enjoyed improvising cooking recipes that always seemed to turn out in his favor and fueled his end of family debates on whose dish was “the best.” His visual impairment motivated him to promote public awareness and education about blind people in the Norfolk community. He supported his community involvement by serving with the Norfolk Lions Club, as a member of the Christ Lutheran congregation, and by aligning himself with individuals who shared his vision in helping other blind Americans. Cliff endured many hardships in life, but his strong will and determination allowed him to persevere. His example provided his children with a framework for strength and success and inspired many people to improvise, adapt, and overcome their own situations. He touched many lives and he will be sorely missed. Funeral Services were held on Friday, April 23, 2021 at the Hoch Funeral Home in Ainsworth with Pastor Mike Moreno officiating at the service. Interment followed in the East Park Cemetery in Ainsworth. Military honors were conducted by Ainsworth American Legion Post #79. Casket Bearers were: Stephen Harris, Ethan Harris, Derek Anderson, Tyler Yagow, Herb Swan, David Kackmeister, Pat Lentz, Max Kucera and Bernie Wyant. Memorials were suggested to the Norfolk Lions Club or to Guide Dogs for the Blind in Cliff's name.

Clifford Talmadge Harris, 65 years of age, was born on January 17, 1956 in Wichita, Kansas. He spent his youth in the town of Ainsworth, Nebraska and enjoyed everything the Sandhills had to offer a young man. Cliff passed away peacefully in... View Obituary & Service Information

The family of Clifford T. Harris created this Life Tributes page to make it easy to share your memories.

Clifford Talmadge Harris, 65 years of age, was born on January...