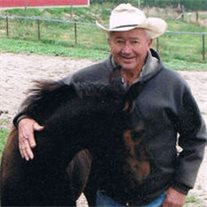 Clayton Harold Chase was born on March 13, 1928 in Omaha, Nebraska. He was 3 months old when he was taken to the Nebraska Children's Home. His biological mother wanted to keep him but as a single Mom, knew he needed a good home with parents. Harold and Kitty Chase of Elsmere, Nebraska received word that a baby was available for adoption. In 1928, Kitty road on a truck with Miriam Clark, to Omaha, to bring Clayton back to Elsmere and make his home with them. Clayton attended country school in Elsmere. He attended 2 years of High School at Purdum, Nebraska then finished at Ainsworth High School. Clayton was active in the Boxing Club at school. His activities were limited, as he also had 2 jobs. He worked at the Skinners Motor Court and the Wonder Bar for Edna Pendergast. He would go home on weekends to work on the ranch with his dad. He returned to the ranch to build a successful ranching business with his dad. Clayton met a pretty girl when she was very little. As she grew older he would ask her to go fishing. Carol said, she would tell her aunt "she wasn't going fishing with that guy!!" Well, as we all know cupid can change the heart, and Carol Meads and Clayton began dating. They enjoyed going to the Cottonwood School dances. After 3 years of dating they were married June 26, 1949. The debate is that Clayton says Carol asked him and she says he asked her. The Elsmere Church was in the process of being built, so was quickly finished and they were the first couple to be married there. Two girls were born to Clayton and Carol, Paige Ann on January 23, 1953 and Kathy Jean, February 1, 1956. Clayton was blessed with a beautiful voice and music was a very important part of his life. He played the accordion and piano. He tried to learn the trumpet but was unsuccessful in mastering it. He sang for many programs, weddings and funerals. He would burst into a song at any minute, and that was especially enjoyed by his children and grandchildren. As a family, they would sing when traveling, because no matter where they went, there were many miles to travel. He would wake up singing and would be singing when he went to bed. Clayton was the local barber for many neighbors. He was a mechanic, welder, builder, and used his skills to help any neighbor in need. He was a very kind, practical, and generous man. Clayton had a gentle hand with his livestock and horses. In 2000, Clayton and Carol decided it was time to slow down. They sold the ranch and moved to Ainsworth where they built a home and purchased 27 acres. The "slow down" actually didn't happen. Clayton raised alfalfa and calves, so the ranching operation continued, "just on a smaller scale." The activity that they enjoyed the last 3 years was playing in the BO JU Kitchen Band. Clayton kept the time with the wash tub drum and sang many songs. They entertained at many local activities including Cottonwood Villa, the Ainsworth Care Center and the Bassett Senior Center. Due to the decline of Clayton and Carol's health they moved to Cottonwood Villa in Ainsworth, Nebraska in 2011. Clayton passed away at the Brown County hospital on May 15, 2013. He leaves treasured memories in the hearts of his wife Carol Chase of Ainsworth; daughters, Paige Coash and husband Don of Bassett, Nebraska, Kathy Leach and husband Lanny of Benbrook Texas; 12 grandchildren and 4 great-grand children; brothers, Mick Chase and wife Beth of Ainsworth, Tom Bjorklund and friend Rosanne of Houston, Texas; sister, Janice Rosane of St. Edward, Nebraska; along with many family members and friends. Funeral Services were held on Saturday, May 18, 2013 at the United Methodist Church in Ainsworth, Nebraska. Pastor Eldon Davis officiated the service. Special music was provided by Sherry Campbell, Melanie Coffman and Jay Kelly, Bob and Duane Keim. Special remarks were given by Nancy Davis. Pallbearers were Sons-in-law, Lanny Leach, Don Coash, grandsons, Logan Leach, Ben Shunko, Joel Johnson, Colby Coash, Josh Hahn, Rick Aupperle. Honorary Casket bearers were granddaughters, Lana Reed, Rachel Lambley, Mackenzie Shunko, Kelly Johnson, Rhonda Coash, great-grandchildren, Ella Johnson, Lily Johnson, Cole Coash and Ian Hahn. Burial was held at the Purdum Cemetery in Purdum, Nebraska. Memorials were suggested to the Nebraska Children's Home of Omaha, Nebraska or to Cottonwood Villa. Addresses: Ne. Children's Home ATTEN: Kali Johnson Omaha, Ne. 68137 Cottonwood Villa 450 S. Main St. Ainsworth, Ne. 69210

Clayton Harold Chase was born on March 13, 1928 in Omaha, Nebraska. He was 3 months old when he was taken to the Nebraska Children's Home. His biological mother wanted to keep him but as a single Mom, knew he needed a good home with parents.... View Obituary & Service Information

The family of Mr. Clayton H. Chase created this Life Tributes page to make it easy to share your memories.