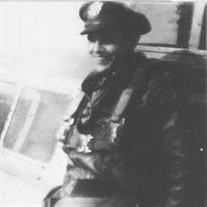 Clayton E. Bejot was born on a very cold day on February 22, 1922 to Gene and Grace (McMurtry) Bejot in the old house on the family farm located six miles northeast of Ainsworth, Nebraska. He was the second child, having an older sister, Edna and eventually a younger brother Joe. Clayton first attended the Buffalo Flats, District #17 country school. He walked across the adjoining section to school attending the old white wooden framed school house the first year, then finishing in the new brick building. He was able to pass the test to allow him to skip the eighth grade and went right on to Ainsworth High School, graduating in 1938, shortly after his 16th birthday. Clayton started helping his dad farm when he was 11 years old. He drove a tractor in the field harrowing corn, and pulling the grain binder. Using these two jobs as experience, he soon found the value in listening to and following instructions, which he would use in the future when he would join the service. He spent many hours on the International Tractor farming and enjoyed the new M Farmall when it was purchased. After Pearl Harbor, he enlisted in the USAAF (United States Army Air Force) as a mechanic and in a few months, moved to training as an Aviation Cadet. He graduated from this training in November of 1943, receiving his coveted Silver Pilots Wings and a commission as a Second Lieutenant. After more schooling and flight training, he became qualified to be an Aircraft Commander of a B-17 “Flying Fortress” Crew. He flew his crew and a new B-17 from Kearney, Nebraska through Iceland and eventually reported for duty at the 457th Bomb Group, in Peterborough, England. He flew 35 missions; 25 to Germany, and 10 to the Low Countries. Being in the service was the high point of his life. All before and after were not nearly as fulfilling. Clayton met Agnes Marie “Marie” Lotz in Salt Lake City, Utah while he was there and they were married in Pecos, Texas on March 29, 1944. To this union four children were born, John, Mike, Catherine, and Paul. After his honorable discharge from the service, he came back to the family farm. Eventually he built a house for the family and moved into it in 1949. Clayton and Marie won many Soil Conservation tree planting awards and many other awards over the years. He served on many boards, several of which he served as board of directors. In later years, they made two trips back to Europe with their B-17 friends, and attended many reunions in various places here in the United States. He was a member of the American Legion and VFW over the years. He helped get the Rural Fire Department started, serving as secretary/treasure for 25 years. He had several hobbies over the years, including being a “Rock Hound,” Woodcarving, and going to sales with Marie. In his later years, 2012, Clayton moved into Cottonwood Villa Assisted Living enjoying it very much, he was there for almost six years. Upon needing more care, he then moved to the Sandhills Care Center, where he passed away peacefully in his sleep on September 13, 2018. Clayton was preceded in death by his parents; his wife, Marie; sister, Edna; and most recently, his youngest son, Paul of Billings, Montana. He is survived by children, John Bejot and Mike Bejot both of Ainsworth and Catherine Smith of Kearney, Nebraska; three grandchildren, and four great-grandchildren; and younger brother, Joe Bejot (Shelia) of Ainsworth. Funeral Services were held at the United Methodist Church in Ainsworth, Nebraska with Pastor David Randall officiating the service. Prelude and postlude music was provided by Linn Baxter as well as special piano selections of “Old Rugged Cross” and “How Great Thou Art.” Pallbearers were Tom Jones, Willie Kackmeister, Lenny Fernau, Artie McDaniel, Ron Rennick, John Halbersleben, and Dennis McBride. Burial followed at the Ainsworth Cemetery with Military Honors being provided by the Ainsworth American Legion Post #79, the Army National Guard Funeral Honors Team and representation of the Bassett American Legion Riders. Hoch Funeral Home of Ainsworth was in charge of the arrangements.

Clayton E. Bejot was born on a very cold day on February 22, 1922 to Gene and Grace (McMurtry) Bejot in the old house on the family farm located six miles northeast of Ainsworth, Nebraska. He was the second child, having an older sister, Edna... View Obituary & Service Information

The family of Mr. Clayton E. Bejot created this Life Tributes page to make it easy to share your memories.