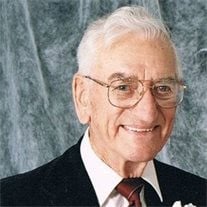 Clarence Everett Ruther, the youngest of nine children, was born January 13, 1918 to Joseph and Helena (Hintz) Ruther on the family homestead near Springview, Nebraska and died March 2, 2014 in the Parkside Manor at Stuart, Nebraska. He attended elementary school in Keya Päha County and Saint Joseph High School at Atkinson, Nebraska. Clarence was inducted into the Air Force on Dec. 22, 1942 and while serving in Scotland, he was married to Agnes Kay "Betty" Burns, May 16, 1945. He was awarded the Good Conduct Medal, seven Bronze-Stars and two Overseas Service Bars. He was honorably discharged on October 24, 1945. In 1946, Betty arrived in the United States and they lived their entire married life in Keya Paha County except for a few years in the Valentine area. They returned to ranching on the homestead in partnership with his brothers Lawrence and Ernest. They moved to Springview in 1956 where they owned and operated the 11th Street Liquor Store before retiring in 1982. Clarence also worked many years for the Springview Flour & Grain and for more than 30 years he was employed by George O'Brien and Island Supply Co. Clarence became an avid golfer and enjoyed the many friendships he made on the links. They also enjoyed traveling after they retired. He was a long time member of the Springview Volunteer Fire Dept. and was a faithful member of American Legion Post 98 for more than sixty four years where he held many offices. Clarence was preceded in death by his wife Betty in 2009, his parents, four brothers; Lawrence, Frank, Charles and Ernest and four sisters; Frances Roberts, Josephine Shaffer, Martina Schroeder and Lena Dibble. He is survived by one sister-in-law, Elaine Ruther, Valentine, Nebraska; numerous nieces and nephews as well as two sisters-in-law, living in Scotland. Funeral services were held on March 7, 2014 at Hoch Funeral Home in Ainsworth, Nebraska. Father Jim Heithoff served as Celebrant. CD selections of "Amazing Grace", "Just A Closer Walk With Thee", "The Old Rugged Cross" and "At The End of the Road" were provided. Pallbearers were, Raymond Shaffer, Troy Shaffer, Jim Larson, Dick Nietfeld, Gerald Keech, and Justin Ludemann. Honorary bearers were, all of Clarence's other family and friends. Military honors were provided by the Springview American Legion Post #98. Burial was in the Mount Hope Cemetery in Springview, Nebraska. Memorials were directed to the Springview American Legion Post #98 or to the donor's choice.

Clarence Everett Ruther, the youngest of nine children, was born January 13, 1918 to Joseph and Helena (Hintz) Ruther on the family homestead near Springview, Nebraska and died March 2, 2014 in the Parkside Manor at Stuart, Nebraska. He attended... View Obituary & Service Information

The family of Mr. Clarence E. Ruther created this Life Tributes page to make it easy to share your memories.

Clarence Everett Ruther, the youngest of nine children, was born...