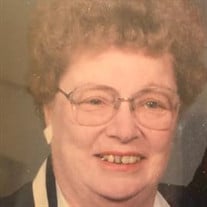 Clara Mae Severson was born on May 6, 1928 to Chris and Martha (Hendrickson) Severson at Taylor, Wisconsin. She passed away February 7, 2020 at the Sandhills Care Center in Ainsworth, Nebraska, at the age of 91 years. Clara Mae’s mother, Martha, was a nurse. Martha cared for Tuberculosis patients in Milwaukee, Wisconsin. She became a victim of Tuberculosis herself and passed away when Clara Mae was only 18 months old. Clara Mae’s father, Chris, served 8 years in the Navy as a cook. Chris cared for Clara Mae most of the time, along with help from Grandma Hendrickson raising her and hiring girls to keep house and care for her. Clara Mae followed her dad everywhere. She would help feed cows and calves and gather the eggs. By the time she was six and went to school, they no longer had a hired girl. She loved school and enjoyed playing with her friends. When Clara Mae was 14 her dad married Cora Davis, a neighbor lady that had lost her husband. Cora was a very good cook. Clara Mae went on to high school and graduated as Salutatorian of her class. She then moved to Milwaukee to work and care for A.O. Smith’s daughter’s family, the Donaldson’s. Clara Mae did the housework, cooked and cared for their baby girl, Danielle. The Donaldson’s had 2 dogs. Each dog had a dish with their names printed on them. Which made you question, how could the dogs know which dish to eat from? By Fall Clara Mae decided to leave Wisconsin and go to Nebraska to teach rural schools. She found a different way of life and new friends. Clara Mae met Edsel Daniels, and became engaged for three years and were united in marriage on June 24, 1950 in the Lutheran Church at Taylor, Wisconsin. In 1958, Clara Mae and Edsel adopted Eddy Dean at the age of four months. In December of 1962, Christin Lee was adopted. Clara Mae and Edsel lived eight miles east of Elsmere for 25 years, raising cattle and farming. Clara Mae taught school for 35 years at various country schools. One of her favorite hobbies was baking. She attended many Farmers Markets with her baked goods such as cakes, pies and bread. She enjoyed gardening, growing beautiful flowers and sewing endless projects. She also had a love for cooking and prepared endless meals for family and friends. Her only expectation was that everyone get to the table before dinner was cold, which meant you had about 10 seconds to get to the table before grandma gave another, “come on guys, dinner is ready!” Clara Mae is preceded in death by her parents, husband Edsel; son, Chris; sister-in-law, Betty Iverson and brothers-in-law, Dude Daniels and Noral Daniels. She is survived by her son, Eddy (Joan) Daniels of Ainsworth; sisters-in-law, Mary Daniels and Shirley Daniels of Ainsworth; five grandchildren, eleven great-grandchildren and many nieces and nephews. Funeral Services were held on Thursday, February 13, 2020 at Zion Lutheran Church in Ainsworth with Pastor Georg Williams officiating at the service. Music was provided by Georgia Williams and special music was provided by Joe McBride and Mel Coffman singing the selections, “In the Garden” and “The Hand That Rocks the Cradle,” and the CD Selection of “Angles In The Room” by the Ruppes was played. Casketbearers were: Jory Daniels, Hooter Dodds, Joe Dodds, Curt Lewin, Jim Hendrickson and Dane Sears. Honorary Bearers were: All of Clara Mae’s Other Family and Friends. Memorials were suggested to the Ainsworth Public Library or to the family in her name for future designation. Interment was in the Ainsworth Cemetery under the direction of the Hoch Funeral Home of Ainsworth. Online condolences may be left for the family at www.hochfuneralhome.com.

Clara Mae Severson was born on May 6, 1928 to Chris and Martha (Hendrickson) Severson at Taylor, Wisconsin. She passed away February 7, 2020 at the Sandhills Care Center in Ainsworth, Nebraska, at the age of 91 years. Clara Mae&#8217;s mother,... View Obituary & Service Information

The family of Clara Mae (Severson) Daniels created this Life Tributes page to make it easy to share your memories.