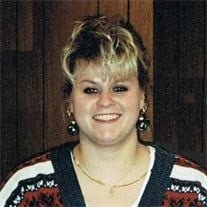 Christi Michelle (Hollenbeck) Fathke, or "Chris" as she was better known, was born July 10, 1971 and grew up on the family ranch 25 miles south of Long Pine, Nebraska. In March of 1975 her brother Todd, joined the family making it complete. She went to grade school at the Paramount School District, which was just a few miles from her home, and was the same school her Dad had attended. She attended High School in Ainsworth, Nebraska, with graduation in 1989. Chris was unsure of her plans following graduation and finally decided to go to Bahners in Fremont. Thus, the beginning of her cosmetology and barbering career. It was during this time that she met her first husband, Dan McElhaney. They later divorced. Chris starting working in O'Neill, first at the Golden Hotel and then for the Mane Event Hair Salon, where she spent several years before opening her own shop in O'Neill, "Headlines". She met her second husband, John, in 1999 and in 2001 they decided to move to Jackson, Nebraska, where Chris had a beauty shop and nail room right in her home. The Jackson community welcomed her with open arms as she helped with many community events, participated in bible study and served on the Dakota County Extension Board. Chris and John separated in 2009 and Chris continued to live in Jackson, working from home until 2012, when she decided to work for Beauty Worx Salon in South Sioux City, Nebraska. Chris was a wonderful beautician with a huge clientele all of whom she loved dearly. Chris enjoyed various activities outside of work. She loved to golf and she and Buffy would do so every chance they got. She also liked to play scrabble, cribbage, dominos and card games; and, there were always several games played whenever family got together. Of course, Chris was happiest when she was winning! When she came home to the ranch to "get away from it all", she always liked to help feed and chore and sometimes that was quite an undertaking with her inch and a half long fingernails! She thought of herself as a "Harley" girl and loved motorcycle riding. She had a Harley Davidson bike and was out for the first ride of the season when the accident occurred. She was taken to Mercy Medical Center on Sunday, April 28th, 2013, where she succumbed to her injuries. Chris' faith in the Lord was strong and it was her belief that there was a better place waiting when we leave this world. Left behind to cherish her memories are: her parents Terry and Deb Hollenbeck; brother Todd and wife Pam; niece Jorden and nephews Britt and Jhett, whom she loved so very much. Grandma Bonita Williams; best friend Buffy Walsh, John Fathke and his daughters Dana, Sara and Shelby; Uncles; Charles Williams and wife Connie, and Bill Williams, Aunts; Sherry Nielsen and Connie Hollenbeck, cousins; Heather Ousley, Kyndra Hollenbeck, Chad Hollenbeck and wife Traci, Zachary Williams and family, McKenzie and Alannah Williams, and Chase McNulty, along with great aunts, uncles, cousins, and a host of friends. Waiting for her with open arms were Grandparents Neil and Bobbi Hollenbeck, Seth Williams, Uncles; Roger Hollenbeck, Denny Nielsen, Great Grandparents, aunts, uncles and cousins. As one of Chris' friends said, "What a fantastic, creative, and hilarious person." Her smile and personality would light up any room. She touched the life of each and every person she met and will be loved and missed forever. Celebration of life services were held on Saturday, May 5th, in Jackson, Iowa, and on Monday, May 6th, at Hoch Funeral Home in Ainsworth, Nebraska. Donnie Painter officiated over the service. Special music was provided by Chad Chicoine. Lee Ann Huhman shared a poem and special memories. Arrangements were under the direction of Hoch Funeral Home.

Christi Michelle (Hollenbeck) Fathke, or "Chris" as she was better known, was born July 10, 1971 and grew up on the family ranch 25 miles south of Long Pine, Nebraska. In March of 1975 her brother Todd, joined the family making it complete.... View Obituary & Service Information

The family of Christi Michelle (Hollenbeck) Fathke created this Life Tributes page to make it easy to share your memories.

Christi Michelle (Hollenbeck) Fathke, or &quot;Chris&quot; as she was better...