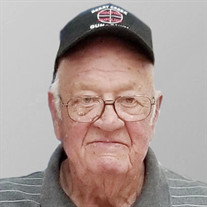 Charles E. Hughes, age 77, of Johnstown, Nebraska, passed away November 15, 2019 at the Emerald Care Center in Cozad, Nebraska. He was born to William “Bill” Hughes and Doris (Anderson) Hughes at the Long Pine Hospital in Long Pine, Nebraska. “Chuck” as he liked to be called, attended Rural School District #56 north of Ainsworth. He then attended Ainsworth High School, graduating with the Class of 1960. He furthered his education at Wayne State College attending for two years, during this time he was drafted into the United States Army. While in the service, he spent time in Korea as a Military Policeman. After serving for two years, he returned home and engaged in farming with his father. On March 11, 1968, he married Mary Lou Koch. This marriage brought the joys of Rocky, Daylene, Tiffani, Christina and Matthew. He watched them grow and succeed in their lives. Along with his wife and children, his life was complete. In June of 1974, the family moved from north of Ainsworth to ranch southwest of Johnstown. Along with ranching he worked various job around the Ainsworth area, always involved with farming and cattle as that was the path of life he chose. Throughout his life, his family was most important to him whether it be his own children or grandchildren. He always enjoyed supporting them by watching and/or hearing about their many activities. Another joy for Chuck was his morning trips to coffee to visit with all the guys and gals and on Sundays, attending the United Methodist Church in Johnstown. If you ever met Chuck, you would immediately be drawn to his kind conversation because he never knew a stranger. Charles was preceded in death by his father, William “Bill” Hughes and son, Rocky Hughes. He is survived by his wife, Mary Lou; daughters, Daylene (Dan) Fox of St. Paul, NE, Tiffani (Steve) Naprstek of Johnstown, Christina (Terry) Carr of Kearney, NE and a son, Matthew (Brooke) Hughes also of Kearney. He is also survived by his mother, Doris Hughes of Ainsworth; two sisters, Elaine Davis of Clearwater, FL., and Lonnie (Bill) Waters of Texarkana, TX; Charlie’s grandchildren, Lesley, Hayley and Dawson Fox, Briley Naprstek, Trinity, Kaleigh and Florian Carr and Reiss and Ryker Hughes. Memorial Services were held on Friday, November 22, 2019 at the United Methodist Church with Pastor David Randall officiating at the service. The music selections of “Guitar Town” by Steve Earle, “Go Rest High On That Mountain” by Vince Gill, “The Party’s Over” by Willie Nelson and “I Can Only Imagine” by Mercy Me were played. The Congregation sang “Amazing Grace.” Specials remarks were given by Tiffani Naprstek and P. Glenn Morgan. Honorary Urn Bearers were: Charlie’s Grandchildren and all of his friends near and far. Inurnment was in the Ainsworth Cemetery with Military Honors by Ainsworth American Legion Post #79. Hoch Funeral Home of Ainsworth was entrusted with the service arrangements. Online condolence may be left for the family by visiting www.hochfuneralhome.com.

Charles E. Hughes, age 77, of Johnstown, Nebraska, passed away November 15, 2019 at the Emerald Care Center in Cozad, Nebraska. He was born to William &#8220;Bill&#8221; Hughes and Doris (Anderson) Hughes at the Long Pine Hospital in Long... View Obituary & Service Information

The family of Mr. Charles E. Hughes created this Life Tributes page to make it easy to share your memories.